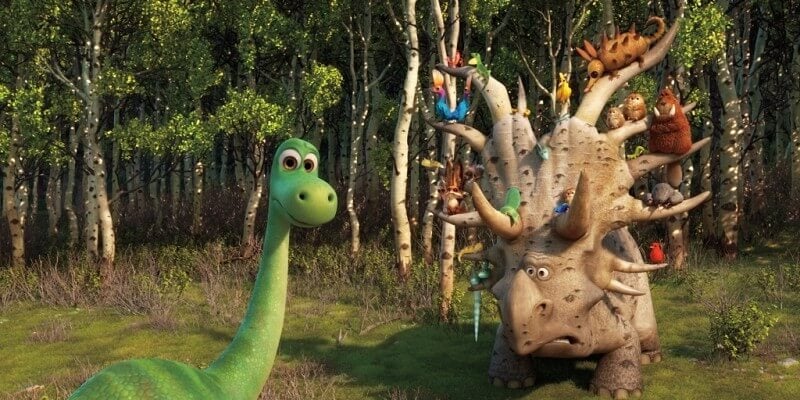 With Disney/Pixar’s latest feature “The Good Dinosaur” hitting the home video market today, it’s the perfect time to reflect on the movie, its development process, and its reception. I recently had the opportunity to sit in a round-table discussion with director Peter Sohn, who talked about what it’s like to finally have the movie available for families to enjoy in their homes.

“I’m real excited about this day, just because it’s a real completion for me… getting done with the film and now it’s finally in the can, essentially,” Sohn remarked. “[‘Toy Story 3’ director] Lee Unkrich, who helped us out a lot on this film, he was saying he doesn’t feel done until he gets that DVD and then he slides it into his library.” Sohn continued, “These movies feel like children. You’re raising them and you’re like, ‘You’re gonna be a superstar!’ Or it’s like ‘I don’t want to be a superstar, I want to be a violin player.’ And you’re like, ‘Oh, okay.’ And then the parenting of listening to the film, and the film is now at the point where it’s like, ‘Bye! I’ll see you, I’m gonna go off to college.’ ‘But, you need lunch money and you need all this stuff!’ And it goes out into the world, and it’s living its life, and you’re like ‘Be good to people, maybe people will be good to you!’ And then it [comes] back and it’s got all this laundry now, like ‘I have all this laundry, Mom and Dad.’ And you’re like ‘Oh! It’s so good to see you, stay for a while.’ You know? And [now] it’s like this last little meeting of Arlo and Spot. It’s been really cool.”

“The Good Dinosaur” was originally scheduled for theatrical release in the fall of 2013, until it was delayed, almost entirely recast, and had its original director Bob Peterson removed by Pixar and replaced by Sohn.

“I wasn’t the original director on this,” Sohn confirms. “And so when I got the project it was very much like a kid that was sick. You’re just like, ‘Okay, how do I take care of this film?’ You know, ‘How do I put my best foot forward with this and help as best as I can?’ And… you know, I don’t have all the answers. With a kid, it’s like ‘What’s the best doctor for you? Who are the best people that I can surround you with?’ And so that was the focus for so long. You’re just focusing on trying to make the best thing possible. And once it’s out, there’s this energy of like, ‘Okay, you’re out there now. And then this excitement builds differently. And so now I have felt it, but during the making of it, I was never thinking about that at all. It came through an evolution for sure.”

However, Sohn had been involved in the project from its beginning, and was instrumental in shaping the story as it evolved. He even managed to incorporate lessons learned during his childhood. “For me, the inception of all this, and I’ve talked about this a lot, but my parents didn’t speak English. And so you just learn to try to communicate in other ways. It has a lot to do with body language and tone. Some of our favorite films that have connected in our family were stories that were told very well visually. And a lot of those were animated movies, where they are able to kind of put structure on things through gesture and observation and I didn’t know it at the time, but that made such an impact on me growing up.”

As a first-time feature director, Sohn faced a bit of a learning curve in helming “The Good Dinosaur.” He explains, “I had some confidence in certain areas, only because I had worked in those departments before, mostly in the art side. Art, animation, and story. I spent a lot of time in story. So I had some amount of confidence. But it’s still never easy, and all the other departments I had no experience whatsoever in, so there were many times where I was very nervous and very scared. But my responsibility [and] my only focus was, ‘How do we make the best movie we can in the time that we have left?’”

I wondered how Sohn imagined “The Good Dinosaur” would resonate in the pantheon of Pixar animated features, and in the history of Disney animation as a whole. “[Viewing] these films as [metaphorical] children has opened my eyes to what they are: these living, breathing things that people can love or hate or react in whatever way they want,” he responded. “But the fact is that it still belongs in this family [no matter what], do you know what I mean? And so I see it as its own entity that, I can only hope that it can be something loved within that family, but I have no idea. That’s for time to tell.” I also asked if he thought the movie would become better appreciated as time goes by. “I hope so. I’ve heard that a lot,” he replied. “I’ve heard from people that have seen it a second time or a third time that go, ‘Oh my goodness, it gets better with every viewing.’ And so I take that into my heart. That’s very nice. But I hope so. I don’t know. It’s very interesting, the life of a movie after [its release]. You know, this is my first time making something like this, so everything that’s happening is kind of my first foray into it, but all the other directors have their things that they have gone through with their movies, good and bad, and everything about the life of the film afterwards. Some movies aren’t talked about, or some movies are continually talked about, surprisingly. But there’s ebb and flow to all of this, and to the ‘cinema gods’ or however that works.” “The Good Dinosaur” is now available on Blu-ray, DVD, and digital download.