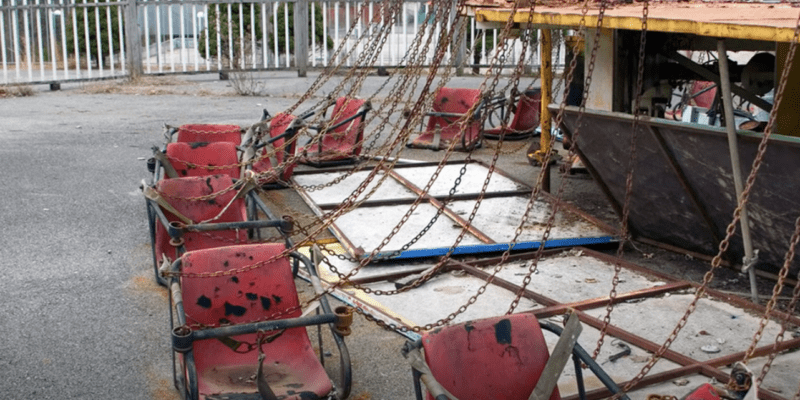 Imagine going on a stroll and stumbling upon a theme park, except, it is abandoned!

Angel was vacationing in Gatlinburg, in her Gatlinburg Chateau rental when she decided to leave her home and go on a hilly walk. Angel would walk through the Downtown Gatlinburg strip every day on her vacation, but would try and walk on different sections of the streets every day to take in all of the sights and surroundings. On the last day, Angel noticed what she thought to be an abandoned ski lift.

Angel wanted to know more, but was worried about what she may find. She stated, “As I took steps one by one my heart began to beat faster. I approached the corner of the overgrown bushes to find a lift and the chair that were still intact. It was like finding a buried treasure but hanging in mid-air. I wanted to go further up the hill but thought alone might not be my brightest idea.”

Below is a list of the attractions that were once available at the now-forgotten theme park:

It seems that the Park ended up shutting down due to financial concerns. Now, it has been over 20 years, and the theme park still eerily remains, rides intact, while hidden in plain sight.

Here is a full look at the theme park as it stands.

When it comes to abandoned things at Disney Parks, there definitely are a few.

From abandoned ideas to a fully abandoned amusement park such as Disney’s River Country at Disney World, there is a lot to dig into. Although many may associate Japanese Disney Parks with Tokyo Disneyland and Tokyo DisneySea, another theme park was meant to become a Disney Park and when then left to rot.

Nara Dreamland stood looking like Disneyland; however, the park would have no affiliation with the park and company. When Guests would enter Nara Dreamland, it was easy to see where the Disney resemblance was held. The park also had a castle as the “weenie” (as Walt liked to call it), which looked very similar to Sleeping Beauty Castle. The theme park would also have its own version of a Main Street, a Mad Tea Party-Esque ride, a Jungle Cruise-style boat ride, and a Matterhorn-like attraction.

The theme park remained open for 45 years, but Nara Dreamland suffered greatly when Tokyo Disneyland was built. Attendance dramatically dropped at the theme park as Guests favored the new Disney-affiliated park over Nara Dreamland. In 2006, the theme park closed its doors for good, and not much was done after. The park would be left to decay for 10 years until 2016, when demolition would finally begin.

Did you know that Fun Mountain used to exist?