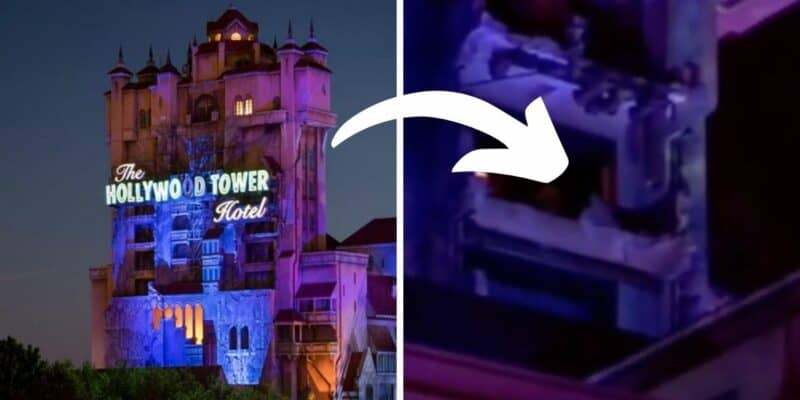 The ride tells the story of a hotel, The Hollywood Tower Hotel, on the tragic night of October 31, 1939, when lightning struck the building. Five people were aboard an elevator when the hotel was struck, causing the elevator to free-fall and land directly into the Twilight Zone.

Though this backstory is, of course, fiction — new video footage has revealed that the Tower of Terror may actually be haunted.

In a video shared to TikTok, on one evening at Disney’s Hollywood Studios, Guests were watching as the Tower of Terror dropped others directly into the Twilight Zone. When watching the one drop, right before the elevator falls, you can see a white figure standing on the edge of the opening. After the elevator drops, the figure is still standing there.

The white figure remains there for a few second before slowly walking away and disappearing.

You can see the video below or by clicking here:

There have been rumors that Tower of Terror is haunted, as well as other attractions such as Big Thunder Mountain in Disneyland and Haunted Mansion in both Disney World and Disneyland, but this is one of the rare cases where Guests actually caught a spirit on camera.

More on Disney’s Tower on Terror

Do you believe this footage of Tower of Terror? Do you think the building is haunted? Let us know in the comments below.

Comments Off on Chilling Video Footage Proves Tower of Terror Is Haunted, Ghost Spotted On Ride