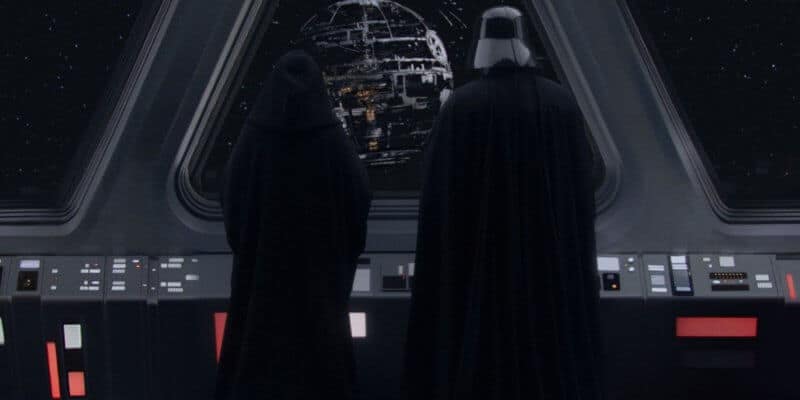 The Star Wars family sadly lost one of its icons this past weekend as X-Wing and Death Star designer, Colin Cantwell, passed away on Saturday, May 21, 2022, aged 90 at his Colorado home.

Behind every great creation is an equally great mind. That was the case for George Lucas’ Star Wars original trilogy which debuted with Star Wars (1977), now Star Wars: Episode IV — A New Hope in the late 1970s. While people like Jedi Master Luke Skywalker (Mark Hamill), Princess Leia Organa (Carrie Fisher), and Han Solo (Harrison Ford), bounty hunters like the character Boba Fett and Sith Lords like the disgraced Anakin Skywalker/Darth Vader (Hayden Christensen), were the brainchild of Lucas, other visionaries contributed to the sprawling Skywalker Saga.

Perhaps the most iconic “moon” in pop culture history, and almost as popular as the Millennium Falcon, the Death Star from A New Hope, is almost synonymous with the Star Wars franchise itself and is highly regarded as a classic cinematic location of modern times. The Death Star has been prevalent in the grander Star Wars story ever since the franchise’s birth in 1977 with the original Star Wars movie.

Unfortunately, the man behind the original prototype designs of this iconic pop culture space station has sadly passed away.

Cantwell worked on the Death Star, the TIE Fighter, the X-Wing, the Imperial Star Destroyers, landspeeders, sandcrawlers, and more — all unforgettable parts of the Star Wars story — with direction from Lucas himself. The designer also worked on 2001: A Space Odyssey (1968), Close Encounters of the Third Kind (1977), and WarGames (1983) during his long career.

Born in San Francisco, Cantwell graduated from the University of California, Los Angeles with a degree in animation. He then was personally invited by Frank Lloyd Wright to attend his School of Architecture.

Before he made his way to Hollywood, Cantwell already had an amazing career. Cantwell worked at the Jet Propulsion Laboratory and NASA, creating educational programs for the public to better understand space flights.

Cantwell is survived by his partner of 24 years, Sierra Dall.

From its planet-killing capabilities to the location of Darth Vader (Dave Prowse/James Earl Jones) and Obi-Wan Kenobi’s (Alec Guinness) famous duel, and its resurrection in JJ Abrams’ Star Wars: Episode IX — The Rise of Skywalker (2019), the Death Star is well-known to even the most casual Star Wars fans. Featured in the Star Wars sequel trilogy, the First Order’s Starkiller Base was inspired by its predecessor, proving that the legacy of the not-moon continues to lace its way through Lucasfilm’s leading franchise, the Star Wars universe.

The initial designs of these landmark Star Wars vehicles surely paved the way for the technology and transport fans can see in projects like The Mandalorian and the upcoming Star Wars series, Obi-Wan Kenobi, up to this day.

How did Colin Cantwell’s iconic Star Wars designs affect your life? Let us know in the comments down below!