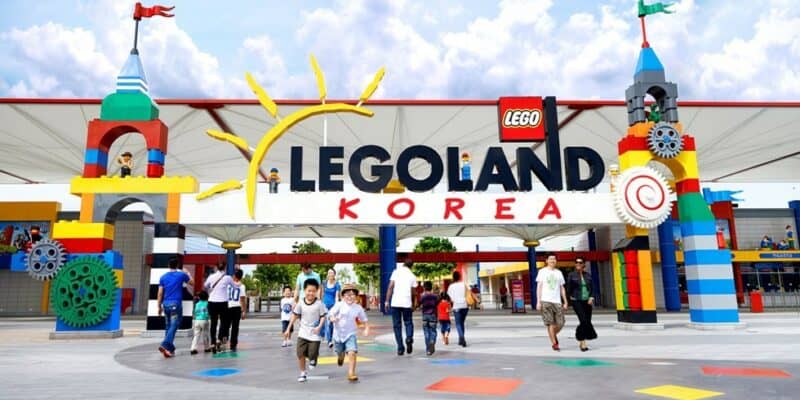 LEGOLAND Korea Resort opened its gates to welcome Guests on May 5th, as part of Children’s Day celebrations in Korea.

The Resort is the 10th LEGOLAND to open globally and the third in Asia, following Japan and Malaysia Resorts. It is also the first to be built on an island in a city with a population of 280,000. However, the Resort faced several obstacles that delayed the opening of the Park for over ten years, including the discovery of 1,400 Bronze Age remains in 2014, which caused activists to step in and stop construction.

In 2017, Merlin Entertainments, the world’s second-largest operator of theme parks and attractions, only behind the Walt Disney Company, achieved a new agreement that allowed the construction of the Resort to continue on the condition that a museum or historical park would be created to preserve the found historical remains. However, this compromise has not been fulfilled, as the found remains continue to be stored inside plastic greenhouses surrounded only by a 2-meter-high fence.

The Pan-citizens’ Countermeasure Committee, which has lobbied against the opening of Legoland, and other civic groups and artists held a joint press conference on Monday, May 2nd, near the Resort, condemning the Cultural Heritage Administration for neglecting the historical artifacts.

“The Legoland operation permit is now invalid as it has completely failed to meet the terms of the conditional use permit,” the committee said. The statement also accused the head of the Cultural Heritage Administration of condoning the “illegal opening” of Legoland.

In the 2017 agreement, it was stated that the historical park and an exhibition hall would have to be ready on LEGOLAND’s opening day. However, no changes have been made to how the relics are being stored.  Oh Dong-chul, chair of Chuncheon Civil Society Network, told the following to The Korea Herald in an interview:

Our groups have participated in multiple hunger strikes, including one in 2019. Over 150 billion won ($118 million) have been poured into the theme park. There is no reason to delay the establishment of the preservation park that had been planned since the early stage of Legoland construction.

However, the Cultural Heritage Administration is blaming local authorities for not being able to secure the budget necessary for the construction of the park and exhibition hall. An official from the CHA told The Korea Herald that the building permit was issued last year and that construction for the park and exhibition hall is expected to start in 2023 as soon as budget issues are resolved.

Despite the protests, LEGOLAND Korea Resort had a successful opening day, welcoming 12,000 Guests who could enjoy over 40 interactive rides, shows, and attractions spawning through over 70 acres.

What do you think about this situation? Let us know in the comments below!