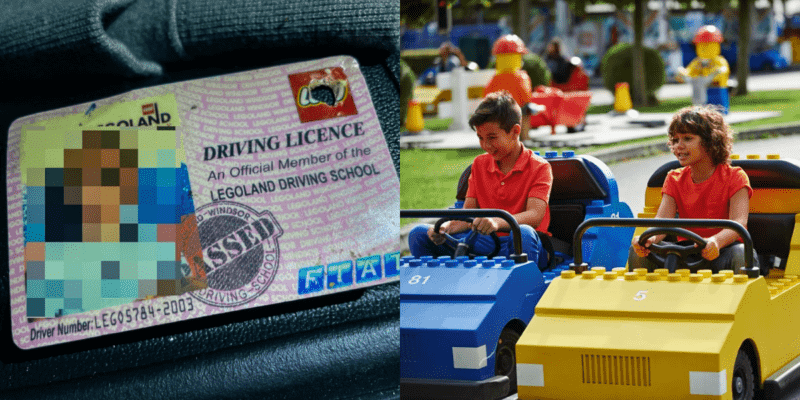 The LEGOLAND Windsor Resort is a destination with lots to offer for every family member, from hotels to entertainment, attractions, and activities. The official site of the Resort states:

At the LEGOLAND® Windsor Resort there are over 55 rides and attractions where children can fly through the treetops to escape fearsome dragons, ride the thrilling rapids with a Viking fleet, join LEGO® divers on a magical underwater adventure and so much more.

One of the most popular rides in the Park is the LEGO® City Driving School, which Guests under the age of 13 can experience. The official  LEGOLAND site states the following:

After watching a road safety video young drivers can take the wheel of their very own electric car and work their way around our LEGO city roads encountering traffic lights, roundabouts, LEGO policemen and even a speed camera.

At the end, they will all earn their first LEGOLAND Driving Licence!

However, causing a 35-mile police chase involving police forces and helicopters is not something this experience prepares visitors for.

The Kent Police arrested a reckless 21-year-old driver after a dramatic chase. Officers could only catch up with the driver’s Audi A1 when he ran out of fuel after chasing him over 35 miles through southeast London and Kent. Then, officers discovered the LEGOLAND License, which the driver had earned in 2003 when he was just a toddler. However, that was not the only reason that caused the arrest.

On their Twitter account, Kent Police RPU (@KentPoliceRoads) stated, “No, the #LegoLand license was not the reason for the drivers dangerous driving, the large amount of cannabis was.”

No, the #LegoLand license was not the reason for the drivers dangerous driving, the large amount of cannabis was. The driver was pursued from #Bexley to #IsleOfSheppey & arrested for a multitude of offences last week by #RPU1, @KentPoliceSwale, @MPSRTPC & @NPASLondon. 28-0061 BB pic.twitter.com/nVBZe7Y46S

Users on Twitter were fast to make jokes about the Lego situation, saying authorities were still trying to piece everything together.

The latest update on the case states that the suspect has been released on bail until September 1st, as informed by a police spokesperson.

While false identifications are not uncommon, it is still bizarre a LEGOLAND license was involved in this incident.

LEGOLAND has so many things that Guests can see and do when they visit. AQUAZONE® Wave Racers allows Guests to feel the wind in your hair and spray in your face as you race the waves steer yourself around to dodge the water blasts. Getting wet has never been so much fun! They can also ride the Battle of Bricksburg, Beetle Bounce, The Dragon, Flying School, Coastersaurus, Kid Power Towers, Ningao The Ride, and more!

Are you a Lego collector? Would you visit a LEGOLAND Park? Let us know in the comments!