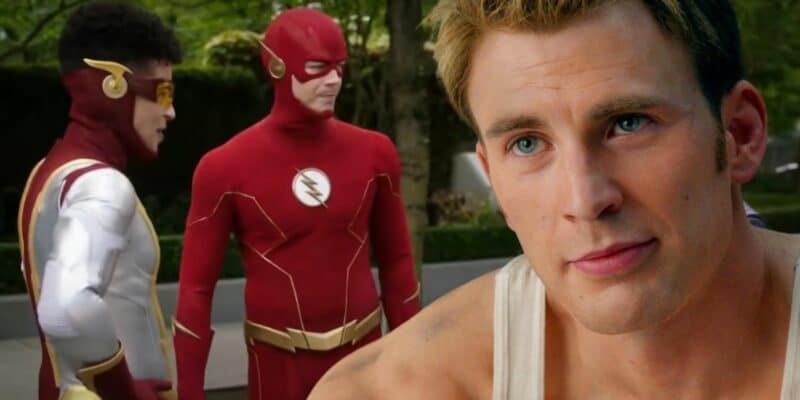 Not every Marvel fan rejoiced when Steve Rogers/Captain America (Chris Evans) reunited with his long-lost love Peggy Carter (Haley Atwell) at the end of Avengers: Endgame (2019). They were not ready to say goodbye to Chris Evans in the Marvel Cinematic Universe and have been looking for any way to bring him back.

Before Doctor Strange in the Multiverse of Madness hit theaters, there were unfounded rumors Chris Evans could suit up again as the first character he ever played in the Marvel Universe – Johnny Storm/ The Human Torch of the Fantastic Four.

And now that Marvel fans got the cameo they have been begging for since the Disney/Fox merger returned the rights of Marvel’s First Family to Marvel Studios. John Krasinski’s short-lived appearance as Reed Richards/Mr. Fantastic in Doctor Strange 2 has fans itching to see their favorite heroes in live-action again soon.

It’s doubtful Marvel Studios president Kevin Feige will bring back either Chris Evans or Michael B. Jordan as Johnny Storm, the little brother of Sue Storm/The Invisible Woman. So, fans are looking for more realistic fan-casting.

And Jordan Fisher, who played Bart Allen/Impulse on CW’s The Flash series, has thrown his name in contention with a single tweet of some fan art:

The Flash is one of the few CW’s DCEU television shows that survived the recent rash of cancelations. Many see the Arrowverse’s days as numbered as Batwoman, Legends of Tomorrow, and Naomi all failed to get new seasons and The Flash and Superman and Lois not bringing in the same viewership they used to on a network that has apparently never been profitable.

Jordan Fisher, who voiced Robaire in Pixar’s Turning Red, debuted as Bart Allen in the 150th episode “Heart of the Matter, Part 1”. Bart Allen is the son of Barry Allen/Flash (Grant Gustin) on the show. But in DC Comics, he is Barry’s grandson and first appeared in The Flash #92 (1994) by Mark Waid and Mike Wieringo. He would join famous teams like Young Justice and the Teen Titans as Kid Flash.

Bart Allen and Johnny Storm have a lot in common. Both are known for being rash and not thinking things through, so Fisher’s experience as Bart could make him a perfect fan cast. Other names like Zac Efron and Timothee Chalamet have been circling the internet as well.

Let us know in the comments who you want to see be Johnny Storm/ Human Torch in the MCU?