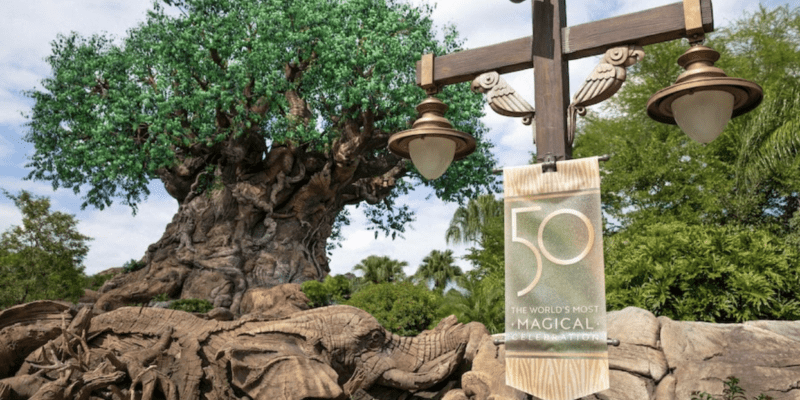 When you’re at the Disney Parks, it’s safe to assume you’re being filmed. It’s almost impossible to avoid the cameras at the Parks, whether you end up in the background of a family’s Castle photo at Magic Kingdom or a blur in a Disney influencer’s YouTube video. But sometimes, you have the opportunity to be a part of something a bit more special!

A few lucky Guests had that chance this week when they witnessed camera crews filming at Disney’s Animal Kingdom at the Walt Disney World Resort.

Please note that a representative of NG Studios, LLC (“NG”), Arrow Media (“Producer”), will be filming and taking photographs in this area. By entering the area, you consent to your voice and likeness being videotaped and or photographed and used without compensation for exploitation in any and all media now known of hereafter devised without limitation, and you release NG, Producer, as well as their respective successors, assigns, and licenses from any liability on account of such usage.

If you do not wish to be recorded as outlined above, please do not enter this area.

Thank you very much for your cooperation and attention!

Notices like this are standard in the entertainment industry when filming in a public place. Still, they often don’t provide much detail on what’s being filmed other than the location, producer, and production company (in this case, National Geographic, which Disney owns). u/graciemoose1 wrote:

National Geographic filming today at DAK! Not sure what- but saw a couple of these signs around the park today

National Geographic filming today at DAK! Not sure what- but saw a couple of these signs around the park today from WaltDisneyWorld

Others who spotted the cameras at Disney’s Animal Kingdom got a little more insight into what was filmed. Twitter user Matt H (@LSThrasher04) saw a truck with a large, extended camera arm filming on the Kilimanjaro Safari ride and noted that it was filming for the second season of the Disney+ series Magic of Disney’s Animal Kingdom.

Along with a photo, Matt wrote:

Filming for season 2 of “Magic of Disney’s Animal Kingdom”

Filming for season 2 of “Magic of Disney’s Animal Kingdom” pic.twitter.com/QIPAPjOXGa

Disney describes the series as:

Disney+‘s “Magic of Disney’s Animal Kingdom” produced by National Geographic and narrated by Disney fan-favorite Josh Gad (“Frozen,” “Frozen II”) gives viewers an all-encompassing backstage pass to explore the magic behind two of the world’s most beloved animal experiences, Disney’s Animal Kingdom Theme Park and The Seas with Nemo & Friends at EPCOT. Viewers get unprecedented access to some of the most rare and beautiful creatures on the planet and meet the animal care experts who have formed remarkable bonds with the parks’ 5,000 plus animals. Each of the eight episodes dives into the details within The Most Magical Place on Earth, unveiling the multifaceted aspects of animal care, operations and Imagineering. Celebrating the magnificent array of more than 300 species, “Magic of Disney’s Animal Kingdom” invites fans of Disney, nature and animals to hang out with all the parks’ residents, including baby Grace, the newest member of the gorilla troop. Then, hop over to Harambe Wildlife Reserve to come face to knee with supermom Masai giraffe, Kenya and up close and personal with Gus the hippo. Viewers can travel to the savanna to witness Dakari, the alpha male African lion, lord over his land and meet Kinsey, the alpha lioness, who’s the real ruler of the pride. The series incorporates cutting-edge technology, including custom-built GoPro housings, 18-foot cranes and underwater camera systems, to reveal the world-famous dedication, pioneering conservation and visionary genius that IS Disney’s Animal Kingdom.

In the first season, fans also got a window into animal care at EPCOT’s The Seas with Finding Nemo. At this time, there are no reports of filming at EPCOT or any other Park.

A release date hasn’t been announced for season 2 of Magic of Disney’s Animal Kingdom, but it seems the beloved series will return to Disney Plus soon!

Are you excited for Magic of Disney’s Animal Kingdom to return? Let us know in the comments.