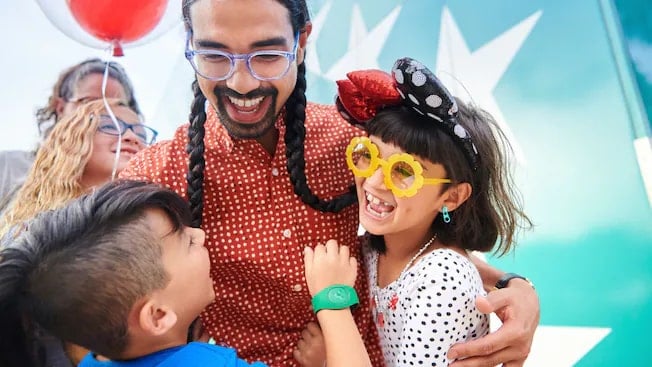 One thing that the pandemic brought to so many Guests traveling to Walt Disney World over the past couple of years was heartbreak. So many have had to cancel their magical vacations due to travel restrictions, health concerns, as well as the upset that they would be paying so much for an experience that was not yet back to its full operation.

Now, Disney World is headed in a direction of normalcy, which is great news for Guests! As we have reported:

Now, Guests are finally able to conduct regular meet and greets with characters which was a huge step for the theme park. Disney did give Guests the opportunity to have socially distanced “character sightings” which allowed Guests to take distanced selfies with Disney characters such as Pooh, Chip and Dale, Minnie, Mickey, and more. But now hugs have returned, along with other offerings like the Festival of Fantasy parade at Magic Kingdom.

Another big change is that there is now a reservation system in place, which requires Guests to score a reservation as well as pay for their Park ticket as normal, in order to enter a Park. Disney CFO Christine McCarthy participated in a Q&A session at the Morgan Stanley’s 2022 Technology, Media & Telecom Conference. At the conference. McCarthy noted a few things that piqued the interest of many Disney fans. She stated that Park’s capacity would never return to normal.

That being said, there are still a lot of ways that COVID is affecting Disney vacations, especially when looking at international travel. One family from the U.K. has been planning their once-in-a-lifetime Disney vacation, which is a massive deal for many. These trips are often planned for years, with a lot of financial savings involved to create the Disney dream vacation. The family took to the internet to share that just days before their trip, they tested positive for COVID-19. Those traveling from the U.K. must present a negative COVID-19 test as well as proof of vaccination in order to travel, and without those, they will be denied.

I am so depressed right now. Had our trip to WDW organised since Xmas and I’ve just tested positive for Covid 6 days before our flight. We are flying from the UK so we need to be fully vaxed and tested 24 hours before the flight. This was supposed to be a once in a lifetime trip celebrating our wedding anniversary and our daughter’s birthday. Now we just feel lost and hopeless. 😭

Many Disney fans flooded the comments, knowing how tough of a blow this is to anyone who was ready to take that magical vacation. A very big suggestion that was stated multiple times was to call and move the trip back a few weeks. Disney would be able to do this, however, dealing with airline cancelations or work time-off requests may make this sudden change very challenging for some.

For all U.K. travelers, please click here for all the rules and regulations needed to enter the United States.

Even if you test negative, there have been other Guests who have been rejected at the gates of Disney due to the new reservation system. Now, the conversation is continuing as it seems more Guests are having complications when it comes to booking Disney Park Passes. Over the past few weeks, Disney World has been swarmed with Guests as spring break ensues, and with that demand has come many at-capacity days at Walt Disney World.

Although the Disney World website will prompt Guests to make their Disney Park Pass reservations when staying at Walt Disney World, it will not force you to do so, and it seems that some Guests are realizing what they must do too late, after the Park Passes they desire are gone. It seems that even for Guests who understand how to use the system, however, that availability is posing to be a major issue among Guests.

Have you had to alter your travel plans to Disney World due to COVID?