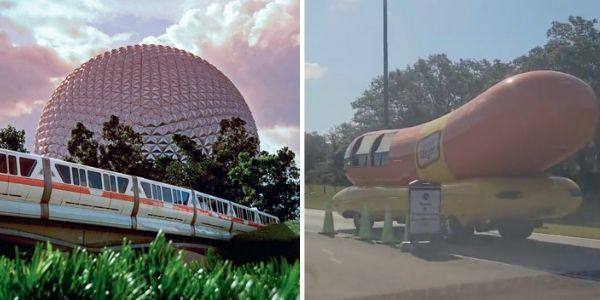 When visiting the Walt Disney World Resort in Orlando, Florida, most families typically load up their minivans and hit the road. Another popular option is flying but due to the ongoing COVID-19 pandemic as well as the current economic state of the country, flying has become somewhat of an unpredictable experience.

But possibly the most unique way to get around the Resort is driving a big hot dog which is exactly what has been happening the last few days.

One lucky passer-by spotted the infamous Oscar Mayer Wienermobile headed toward EPCOT which you can see in a video below from Spaceship Alex (@Alexandra_M):

The Oscar Meyer Weiner Mobile is going to EPCOT

The Oscar Meyer Weiner Mobile is going to EPCOT 🤣🌭🌭🌭 pic.twitter.com/rcEVQuY1Ea

The Oscar Mayer Wiener truck is also known as the Wienermobile. It is used to promote and advertise Oscar Mayer products including delicious hot dogs, bacon, cold cuts, and much more.

At this time, we are unsure of what exactly the Oscar Mayer Wienermobile is doing at Disney’s Animal Kingdom, but Inside the Magic will update you as we get information.

Some eagle-eyed Guests spotted this unique vehicle yesterday at Disney’s Animal Kingdom, so it looks like the Wienermobile is making a round trip to all four Disney Parks.

What’s the coolest car you’ve seen at the Disney Parks?