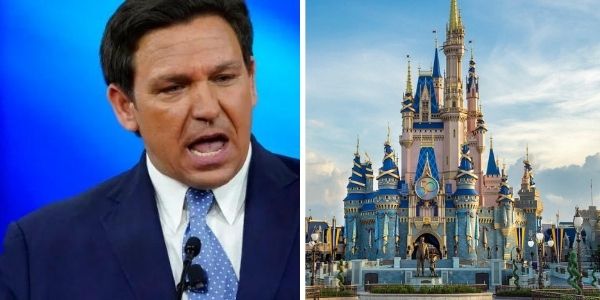 The Florida Gov. may have just been put in between a rock and a hard place.

This firm stance against the new bill caused friction between the company and the state of Florida, with Gov. Ron DeSantis continuing to escalate the battle with incendiary words and potential actions. In recent weeks, Gov. DeSantis heightened the stakes, publicly announcing he was considering terminating the special treatment Disney has been receiving due to the state’s Reedy Creek Improvement act.

Taxpayers of counties surrounding Disney’s theme park area have joined the battle of Reedy Creek, claiming that Florida Gov. Ron DeSantis violated their rights. They specifically state that their rights were infringed upon when he signed a law dissolving special tax districts.

This complaint was filed Tuesday in Florida federal court by residents who live near Disney World, arguing that they will be stuck with at least $1 billion in Disney’s bond debt if the state follows through with its plan to dissolve the Reedy Creek Improvement District.

We previously covered this debt, noting that taxpayers may get left with the bill if DeSantis is successful in terminating the district.

Residents of the surrounding Osceola counties say dissolving Reedy Creek will likely lead to increased taxes for the residents of Central Florida to pay off Disney’s bond debt, estimated to be between $1 billion and $2 billion. “Stripping Disney of this special district designation will move these major regulatory burdens unto the county, thereby increasing the Plaintiff’s taxes, and will cause significant injury to plaintiffs,” the complaint states.

How do you feel about Disney’s Reedy Creek Improvement District?