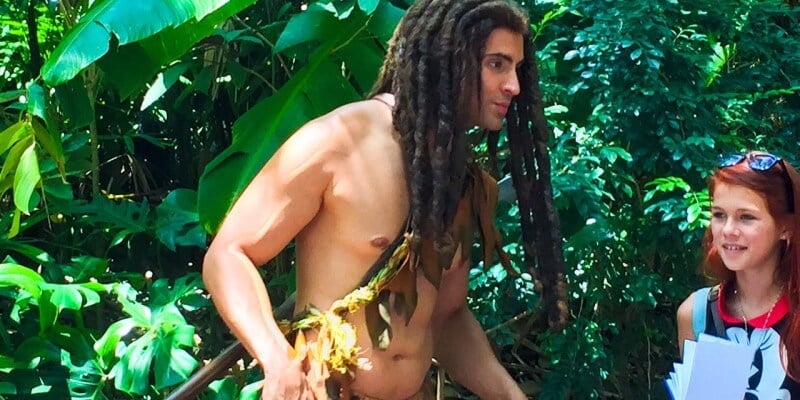 The Disney Parks are all supposed to be a perfect, idealistic spots to visit, whether you’re with a large family or by yourself. They are all filled with iconic and exciting rides and attractions and really have the chance to give you lifelong memories.

However, some Guests take the “immersive” nature of the Parks and Resorts too far, not considering how they are making other Guests or even Cast Members feel.

Character meet and greets are a huge part of the Walt Disney World experience, during which families can engage with their favorite characters and even give them hugs and get their autographs. One of the most popular Disney Parks characters has to be Captain Jack Sparrow.

With an already popular ride in the form of Pirates of the Caribbean at Disneyland, and then a huge blockbuster movie of the same name starring Johnny Depp (Jack Sparrow), Orlando Bloom (Will Turner), and Keira Knightley (Elizabeth Swann), the franchise was sure to be a big hit within the Parks. As with any character’s likeness to its source material, Disney World’s Jack Sparrow took on the same jovial attitude that Depp originated for his most commercially successful role to date.

But Sparrow is not who we are talking about here.

This popularity backfired in a surprising and extremely negative way, however, as shared in an article published years ago from lamag.com. The story, recounted by an ex-Cast Member, gave details on some of the bizarre and unfortunate issues other Cast Members faced when working at the Disney Parks. According to a Cast Member who played the iconic Jack Sparrow in Disneyland Park, one character was cut from the lineup of walk-around characters due to multiple accounts of sexual harassment.

The male character they had pulled was Tarzan. He moved around the tree house dressed in just a butt flap. Disney had hired these good-looking, muscular guys—even airbrushing abs on—and apparently there was excessive pinching of Tarzan’s a** by the park’s female visitors. Knowing all this, and also knowing what women were like around Jack at the Renaissance Faire, I told the other guys, “Don’t complain if girls flirt with you too much. If you do, they’ll pull the character from the park.

Shockingly, it doesn’t end there, with the Cast Member playing Jack Sparrow being approached and “propositioned” multiple times by intoxicated women:

I’ll be honest: I played Jack like he was real, and if a woman flirted, I would flirt back. Women loved it. But there were also women who would have too many beers at California Adventure or smuggle in alcohol you could smell on their breath, women who were clearly sloshed.

I would also get offers from women in my ear: “Anything you want, just find me.” I had a girl who had turned 18 the day before. She was with a high school group, and she wrote down her room number at the Downtown Disney hotel.

We reported on the troubles Cast Members faced while playing the legendary pirate, and this is unfortunately not even the first account of a Disney character being harassed like this in the Parks, with the character of Gaston also being a popular one for Guests to harass inappropriately.

This is an extreme offense not only against Cast Members but Disney Park rules as well. Check out the full list of rules and regulations here.

Are you surprised by how Guests act toward Cast Members?