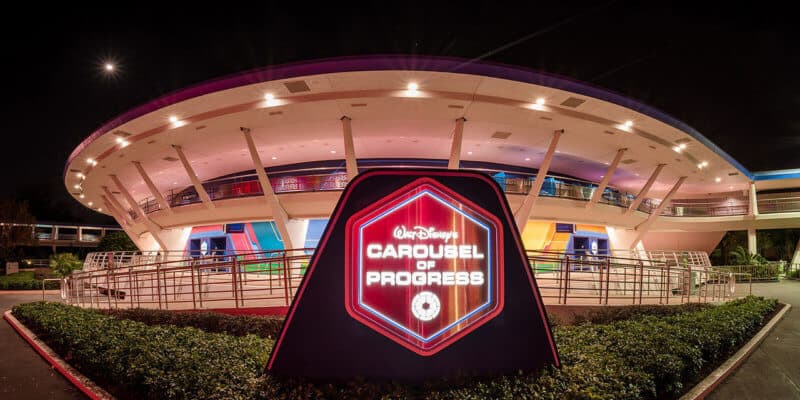 Walt Disney World Resort is home to many thrilling and one-of-a-kind attractions that simply can’t be experienced anywhere else.

When visiting Magic Kingdom, Disney Park Guests fall in love with the timeless and iconic attractions that they’ve known since the very beginning, like Haunted Mansion, Pirates of the Caribbean, Jungle Cruise, and many others. One of the most beloved areas of the Disney Park is Tomorrowland.

Disney Guests can take a ride on Space Mountain, soar high above Tomorrowland on Astro Orbiter, and then help save the galaxy at Buzz Lightyear’s Space Ringer Spin. They can also take a futuristic ride around Tomorrowland on the Tomorrowland Transit Authority PeopleMover and then enjoy the hilarity that ensues at the Monsters Inc. Laugh Floor.

If all of that wasn’t enough, perhaps one of the most iconic attractions in all of Magic Kingdom is nestled in the back of Tomorrowland. Of course, we’re talking about Carousel of Progress.

Carousel of Progress was a show that was conceptualized by Walt Disney himself. The show follows an American family progressing through the 20th century, but the technology within the attraction has certainly seen its better days.

TikTok user @disneyparkdiy recently posted a video showing another malfunction happening in the Carousel of Progress.

Disney Guests have noticed a fair share of animatronic mishaps and audio track issues at Carousel of Progress from time to time and some of those issues have led to rumors that the attraction could go under refurbishment. At this point, however, Disney has not announced a scheduled closure of the attraction.

What do you think of this malfunction on Carousel of Progress? Let us know in the comments!