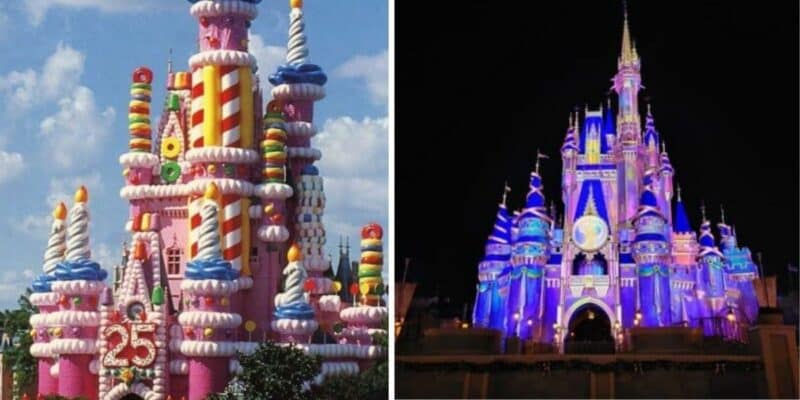 Yesterday evening, a special celebration was held at Walt Disney World’s Magic Kingdom for Cast Members. The event was held to thank and celebrate those Cast Members who have been making magic for 10 years or more, which is an incredible feat with the company! During the event, we saw a lot of nostalgia return, including a commemorative moment of fireworks set to both Wishes and Happily Ever After music.

Cast Members were also able to meet rare characters such as WALL-E and the hitchhiking ghosts from the Haunted Mansion! One special addition that was also brought back was the pink castle cake from the 25th anniversary.

Cinderella Castle in Magic Kingdom was transformed into the best looking (and tasting) food building the world has ever seen on October 1st, 1996 to commemorate the 25th anniversary of Walt Disney World. If you think the recent paint job we have seen on the castle this year was a big deal, the cake castle will blow your mind.

The pink cake of a castle looked like it jumped right out of Candyland and into Magic Kingdom, and let me tell you that 2-year-old me was obsessed with the bright colors and cartoon-esque vibe that this castle eluded.

It may not have been the classic Cinderella Castle that many love to snap a photo of, but it was even better. The cake castle was a limited time architecture work of art that lasted 15 months, and if you have a photo with that castle, many Disney lovers who don’t are probably envious (even though they will never admit it).

For reasons which I do not understand, the 25th anniversary cake castle has been so hated among Disney fans. If 1996 was the year you and your family were taking your once-in-a-lifetime Disney World vacation, then I understand that not getting the classic Cinderella Castle photo could be disappointing. But on the other hand, it could also be an excuse for you to go back now so that you can have a photo with each look!

Yesterday evening, the iconic cake was recreated through the art of projection mapping! Drew (@DrewDisneyDude) posted a photo of the castle in its full glory, rewinding the clock 25 years!

Right now, the castle is decked out for the ongoing 50th anniversary with a much more regal look than what Guests would have seen during the 25th anniversary.

If Disney wants to re-create the castle as a giant birthday cake once more, they are going to need a few baking supplies. I’ll call Tiana…

Here’s what it took to cover the castle:

Would you like to see the infamous castle cake look return to Magic Kingdom?