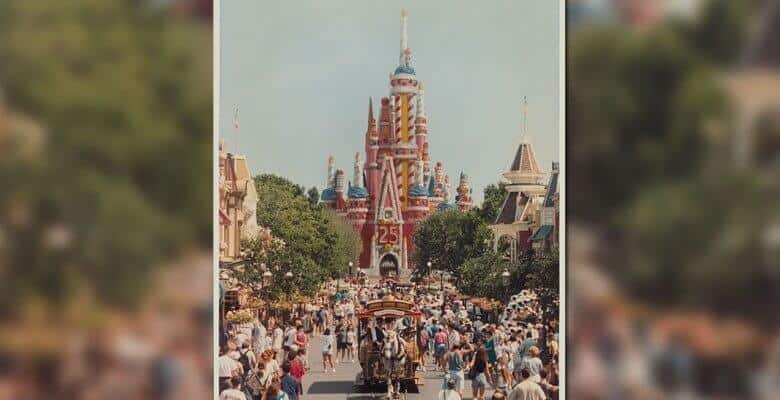 Believe it or not, it’s common for pieces of Disney Park history to become available to the public. Through auctions and warehouse sales, anyone can obtain one-of-a-kind Disney memorabilia. As of this week, you can own something extra special from Magic Kingdom at Walt Disney World.

Earlier this month, we reported on the return of the 25th Anniversary Birthday Cake Castle as a projection during a Cast Member service celebration night at Magic Kingdom. Love it or hate it, this birthday cake took over Cinderella Castle at Walt Disney World for 15 months, starting in October of 1996.

Now’s your chance to own a piece of this controversial castle! According to a TikTok posted by @pagingmrmorrow, the pieces range from $2,500 to $6,000.

In the video, you can see the metal “25” sign that adorned the front of the castle. There’s also a large flower crafter to look like fondant, a shimmering candy heart, some ears of “candy corn” that look like sprinkles, and a massive glittery lollipop.

If a delectable looking castle prop isn’t quite your speed, the video also shows a Haunted Mansion photobooth set piece, a retro metal EPCOT sign, some costume pieces, blueprints, and a piece of the Aladdin parade float whose camels went on to adorn The Magic Carpets of Aladdin at Walt Disney World’s Magic Kingdom.

In the comments, PagingMrMorrow clarified that the props are for sale at The Lakeland Antique Mall in Florida, a popular spot for purchasing rare Walt Disney World artifacts and vintage merchandise. He also linked his YouTube channel, where he posted a full video exploring the mall.

If you’re looking for something from a different franchise, the Lakeland Antique Mall appears to also have some marketing items from Harry Potter and the Cursed Child on Broadway as well as Universal Studios Orlando. In the video, PagingMrMorrow shows off a massive, shiny alligator head, reportedly a piece of the Mardi Gras celebration at Universal Studios.

The mall even has marketing materials from United Airlines, Coca Cola, and other canned food companies. View the full video from PagingMrMorrow and spot the Cake Castle pieces for yourself here:

More on the Controversial Cake Castle at Walt Disney World

Covering Cinderella’s Castle with frosting and fondant was no easy feat! From October 1, 1996 to January 31, 1998, it was adorned with:

While we might not see the Cake Castle’s return, you can reminisce by picking up some exclusive merchandise celebrating the sweet pink decor, like coffee mugs and MagicBands, during a shopping trip to the Emporium on Main Street or World of Disney at Disney Springs.

Did you have a chance to see the Cake Castle in person at Magic Kingdom? Would you like to see it return to Walt Disney World? Let us know in the comments.