Universal Guest Climbs Into Fountain, Screams at Security Guards - Inside the Magic 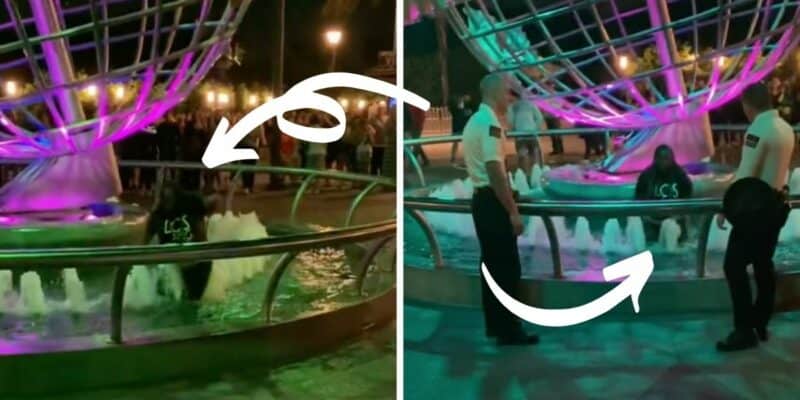 One Guest decided to climb into the fountain at Universal CityWalk and proceeded to scream at the security guards when they tried to persuade her to climb out.

On March 23, a Universal Guest climbed into the iconic fountain at CityWalk Hollywood and proceeded to splash around and dance as others surrounded her to watch. It is unclear if the Guest was under the influence at the time of the incident, but from the video posted online, it is clear the Guest was angered and not listening to the security guards.

She proceeded to dance in the fountain and splash around before yelling at the security guards.

It is unclear what happened to the Guest as the security guards needed to clear the area and the video stopped recording before the Guest exited the fountain, but this Guest clearly broke the rules. Universal Hollywood has rules and regulations in place for the safety of the Guests and Team Members.

Do not physically or verbally threaten or harass any person. Fighting, use of physical force, obscene or sexually explicit language or gestures, or racial, religious or ethnic slurs, including any display on apparel or via body art likely to create a disturbance or a danger to other persons, are prohibited.

Universal Hollywood also has a Los Angeles County Sheriff’s Department Sub-Station on property to ensure the safety of Guests and Team Members. Per the official website:

For the safety and convenience of our guests, Universal Studios Hollywood has a Los Angeles County Sheriff’s Department Sub-Station on premise at Universal CityWalk Center Court.

You can read Universal Hollywood’s rules and regulations here.