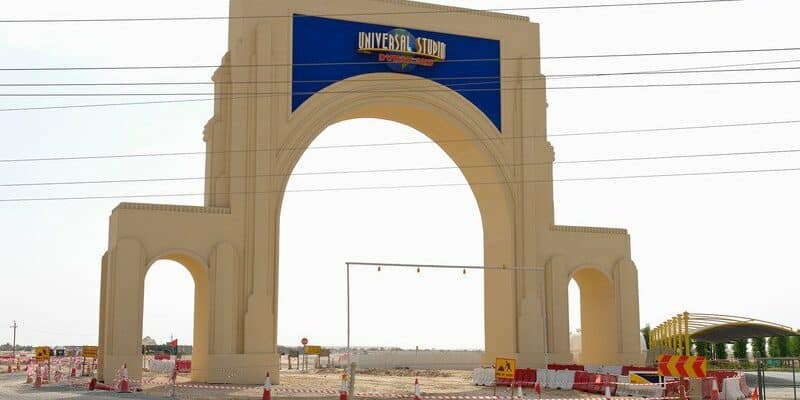 Universal is a leader in global theme park entertainment. They have expanded to four theme parks globally, with the exciting new addition of Universal Studios Beijing coming later this year. However, there is one theme park, Universal Studios Dubailand, that was in the midst of construction, but Universal abandoned the project before it was completed.

When Epic Universe was hit with a delay due to COVID-19, many wondered if this meant that it would suffer a similar fate to Dubailand, a Universal theme park that was announced, plotted for, slightly built, and then abandoned.

Universal broke ground on Universal Studios Dubailand in 2008. According to a report from Arabianbusiness.com:

The theme park was launched to great fanfare at the Arabian Travel Market exhibition in Dubai in May 2007 (image below). “[Dubailand will] contribute to Dubai’s vision to attract 15 million tourists by 2010. Of that, Universal Studios is expected to attract about 3.3 million visitors in its first year, eventually rising to five million a year,” Khalid Al Malik, CEO of developer Tatweer, told Arabian Business at the time.

The designs for the park included many of the same rides and shows from other Universal Studios parks in Los Angeles, Florida and Japan, such as the Jurassic Park River Rapids, but Tom Williams, CEO, Universal Parks & Resorts said there would also be some attractions that would appeal be “suitable for people of this region”.

“In particular, we have the Eighth Voyage of Sinbad, as well as Aladdin’s Magic Carpet Ride, so that, along with other forms of street entertainment and live entertainment, will complement and enhance the overall offering of Universal Studios Dubailand,” he said.

The theme park was to cover more than two million square metres and was expected to cost around $2 billion to build…when the famous Universal Studios gate was installed at the entrance to the park’s site and the project was set to open in December 2010.

Unfortunately, the global economy collapsed in 2008 ultimately leaving this project to stall until it was canceled. Universal did note that they were still open to opportunities in the region, however, the project would be scrapped. But, for years after the project was abandoned, the iconic Universal archway remained untouched in the middle of the desert!

Unbuilt: An Unrealized Theme Park Podcast (@UnbuiltPod) recently posted a fantastic photo of the archway to Twitter. We can see that a road was formed, however, aside from the archway, there are only miles of desert around the incomplete structure.

Good afternoon to, and only to the Universal Studios Dubailand archway in the middle of a desert. pic.twitter.com/H9hgMYFvzp

Years later, the structure would be removed, but now after remaining abandoned for quite some time. Universal Studios Dubailand was part of a wider master plan announced in 2003, which was to include nearly 20 separate theme park attractions on a desert site nearly twice the size of Walt Disney World resort in Orlando.

Luckily, Epic Universe will not take the same fate as Dubailand.

Recently, we heard construction would resume with a summer 2025 opening for the Park, which was fantastic news for all Universal fans. At first, construction seemed to be at a standstill, but now we are starting to see some noticeable progression. Although Epic Universe is not being built on the same property as Universal Studios Florida and Islands of Adventure, the location close to ICON Park is still visible from the rooftop deck of Aventura, one of Universal’s Resorts.

Did you ever know about Universal Dubailand and it’s abandoned history?