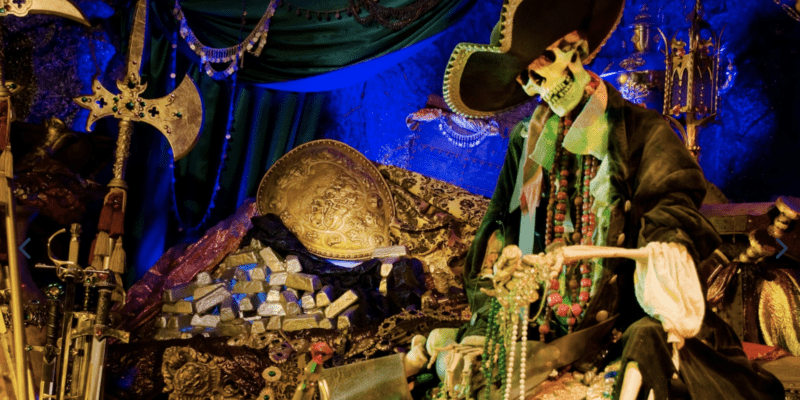 If you are fan of the Disney Parks, you surely love Pirates of the Caribbean. No matter what Disney Park you experience the attraction in, be it Walt Disney World Resort, Disneyland Resort, Shanghai Disney, and so on, Guests always love to hear the classic “Yo Ho Yo Ho a Pirate Life For Me” blast in their ears as Jack Sparrow pops out of a barrel.

Disneyland Resort, is comprised of Disneyland Park, Disney California Adventure Park, and, along with Downtown Disney District, Disneyland Hotel, Disney’s Grand Californian Hotel & Spa, and Disney’s Paradise Pier Hotel. Their, Guests love their Pirates of the Caribbean attraction, which is placed in New Orleans Square. The attraction is significantly longer than the Disney World version in Magic Kingdom’s Adventureland, and also has a restaurant the overlooks a section of the ride, Blue Bayou.

As we reported, a number of attractions will be unavailable during March at Disneyland Resort, and Pirates of the Caribbean will close on March 14, 2022, with a reopening date not yet announced. Currently, the official website states the ride is “expected” to reopen at the Disney Park sometime in Summer 2022.

The attraction is set to be closed through to summer 2022 at the moment. The closure will also cause Blue Bayou to shut down as well.

It was not long ago that Pirates of the Caribbean saw a prolonged downtime with some Guests waiting up to 90 minutes to be evacuated by Cast Members. On this occasion, some riders had to be rescued by firefighters during the malfunction. Knowing this, a refurbishment is a move in the right direction when it comes to the Jack Sparrow (inspired by Johnny Depp) attraction.

Hilariously, Drunk Stormtrooper (@WDWdrunktrooper) played off the idea that the Pirates of the Caribbean attraction is under refurbishment with a comedic Tweet. The user does indicate that they are referencing the Walt Disney World attraction, however, that ride is not currently under refurbishment.

Below, you can see a video of a carnival attraction which is labeled “Pirates Caribbean”. We can see all of the iconic characters from the film on the signage, however, considering the ride is not Pirates of the Caribbean, but just Pirates Caribbean, and the characters are hand-drawn to look a little different than what we may see done by Disney in their films, it seems likely that this attraction was not a licensing deal with Disney. The ride moves in circles and may be a fun carnival ride, but clearly would never compete with the likes of the iconic and fan-favorite Disney attraction.

They finished the refurbishment on #PiratesOfTheCaribbean in #WaltDisneyWorld ! What do you think?

They finished the refurbishment on #PiratesOfTheCaribbean in #WaltDisneyWorld ! What do you think?pic.twitter.com/BJU07lGfeJ

We recently have discussed “Disney” attractions that Guests can enjoy when they are not at the Parks which are often done through other companies making a licensing deal so that they can use the iconic characters in their own attractions. For example, we see a lot of this with kiddie attractions that are placed in many malls around the world! Read more on that here.

Disneyland describes their attraction as:

What do you think about this Pirates of the Caribbean-inspired attraction?