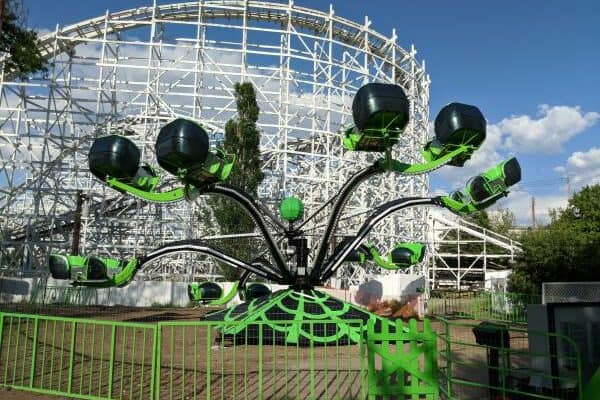 It seems that a popular amusement park is in hot water after an injured Guest is taking matters into his own hands, and suing the company.

Lakeside Amusement Park is home to The Cyclone, which recently left one Guest undergoing a costly surgery, and now suing the company. As Lakeside Amusement Park notes on its site, “Lakeside Amusement Park is a family-friendly amusement park with attractions for all ages. The rides range from the exciting Cylone roller coaster and a thrilling 140-foot drop tower to a calm Merry-Go-Round and a scenic train ride around Lakeside’s picturesque lake with stunning mountain views. Kiddies’ Playland hosts a variety of toddler-sized attractions. Additionally, there are games and fun foods to enjoy.”

The Cyclone is a wooden coaster that lasts about two minutes. It is 2,800.0 feet long and has an 80-foot vertical drop at a 50-degree angle. Daniel Depaola, a Florida truck driver, was in Denver, Colorado when he decided to stop by Lakeside for some fun. He noted that he went, “just to have a little bit of fun, you know.” Depaola went on The Cyclone a few times, hands in the air as many do, and after his fourth ride, his hand was struck on a wooden beam with force.

The Guest said, “At first I thought I just sprained my wrist and lost a layer of skin in the elbow and wrist area.” He went to first-aid to get the injury looked at and cleaned up. He was in a lot of pain and after leaving a report with the Park, he went to the hospital to find out he had a severe fracture and needed surgery. Depaola now has over $100,000 in medical bills resulting from the theme park injury.

“We are absolutely open to an amicable out-of-court resolution but they decided to go a separate way and, to be honest with you, not even give us the time of day or consider the consequences of their actions,” Landis alleged in an interview.

A man who answered the phone at Lakeside Amusement Park on Friday said the park has no comment on the lawsuit. Brenda Fishman, the park’s head of operations, said in an email, “We have a policy not to comment on pending litigation.”

It seems that it is being claimed that the seat belt was not functioning properly, causing the rider to be lifted from his seat enough to have his hand strike the 1940-built coaster. The publication also noted that “Amusement park rides are inspected annually in Colorado, and those inspections are certified by the state’s Division of Oil and Public Safety. Certificates of inspection obtained by BusinessDen show The Cyclone most recently passed an inspection in June 2021, five weeks before the alleged incident, by an insurance company from Kansas. The inspector did not respond to a request by BusinessDen for more details about what his inspection found.”

In the past decade, two other injuries have occurred at the Park. In 2013, one Guest collided with another on the Flying Dutchman causing “permanent physical disfigurement, disability and impairment” and “loss of enjoyment of life.” In 2011, a piece of wood hit a young boy on The Spider leaving him with a brain injury. Both injuries resulted in a lawsuit against the Park.

Inside the Magic will keep you updated on this developing story.