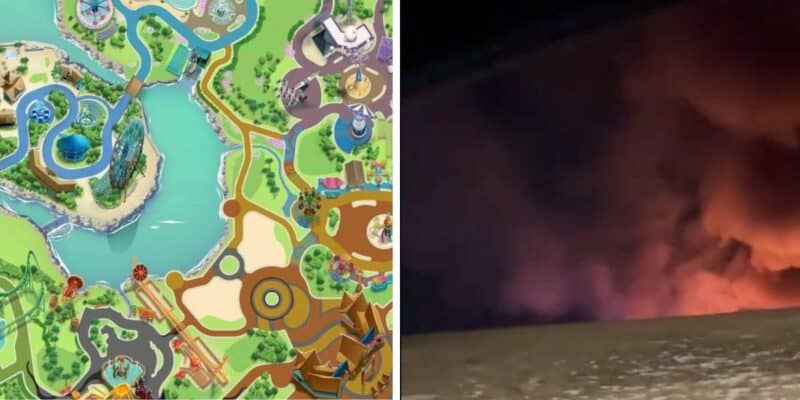 Having any fire touch a theme park can be devastating and detrimental to the theme park’s ability to operate. Depending on the circumstance, the fire could be hazardous to Guests, or potentially the attractions that so many love to enjoy when they visit. Fires can destroy what has already been created, causing theme parks to revert to the beginning of their journey, and rebuild.

At Walt Disney World, we recently discussed a fire that broke out on Under the Sea ~ Journey of The Little Mermaid at Magic Kingdom due to fireworks hitting the area. We have also noted multiple evacuations from restaurants like Cinderella’s Royal Table, ‘Ohana, Space 220, and more due to fire alarms going off. Universal Orlando Resort has seen fires as well, but luckily Guests have never been hurt, and the fires have never been large enough to cause severe damage.

Recently, one theme park located in Waterloo, Iowa had quite the scare. The Lost Island theme park recently had a major fire break out that did affect one attraction severely. KWWL reported:

The Lost Island Theme Park is cleaning up and moving forward after a fire destroyed one of the theme park buildings, still under construction. An approximately 1500-square foot queue shelter building caught on fire at the far southwest edge of the park on Thursday night. It’s one of the areas where Lost Island Theme Park customers will stand in line, waiting to board a ride. Owner Gary Bertch said the building is a total loss, and he said it appears some temporary heating caught a blanket on fire. “We feel fortunate that no one was hurt. That’s the most important thing,” he said. “This is just materials, and it’ll be a bit of a setback, but we’ll just look forward to bringing the ride to our guests as soon as we possibly can.”

The Park expects to lose The Yuta Falls flume for the season due to the fire. That being said, the Park is still set to open in May, as originally planned. Considering the theme park has a dark ride based in a volcano with lava monsters, the idea of a fire breaking out is a sad coincidence that feels close to the Park’s theming.

Meteorologist Nick Stewart (@NStewCBS2) posted a video of the fire to his Twitter, which occurred on March 10, 2022.

Rides such as Shaman, Tago Nui, and original Dark Ride, VOLKANU: QUEST FOR THE GOLDEN IDOL are among some of the popular expected offerings at The Lost Island Park. Udara’s Amara Aviators, Kapulele Gliders, as well as Ohu Hoppers are all testing as well at the moment as the theme park gears up to open. At The Lost Island theme park, there is a special language spoken. The Tamariki and the four Realms speak “Aukipi” — the language of the island. They also use unique symbols to communicate. Use the key above to translate hieroglyphs you see throughout the park; you may uncover a secret message!

The Lost Island theme park will open in May of 2022.

We are glad that no one was injured during the fire and The Lost Island theme park is still on track to open, despite this unfortunate event.

Have you ever seen a theme park catch on fire? Let us know in the comments below.