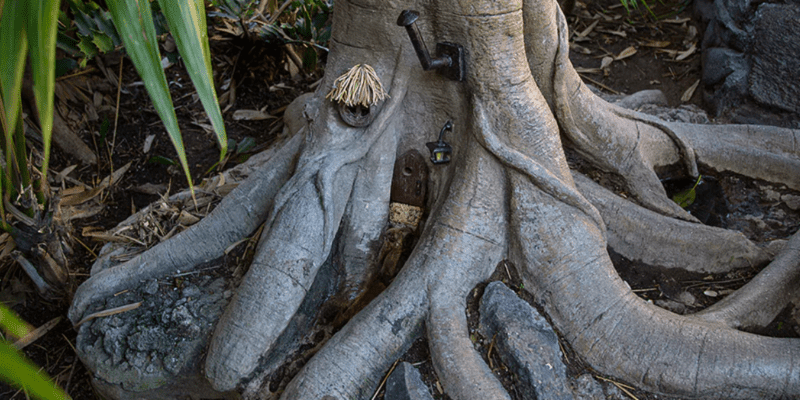 Many Guests are familiar with the story of Patrick Begorra, the Little Man of Disneyland, and his Adventureland Home.

For those who are not, Patrick Begorra, or the Little Man of Disneyland, is a fable from Disneyland which originated in 1955, around the time Walt Disney was working on making his latest dream come true, Disneyland Resort.

The story comes from one of Disney’s Little Golden Books, which were well-told and richly illustrated volumes that told both adaptations of classic films and new specially created stories, such as Patrick’s, perhaps one of the most popular ones.

The official website for D23 tells Patrick’s story as follows:

The charming story of Patrick, a leprechaun who lives in a tiny, half-hidden house at the roots of an Anaheim orange tree—until one day Donald Duck, Mickey Mouse, and Goofy (and Pluto too) turn up. They are ready to start moving trees so they can build “a wonderful place called Disneyland… with all sorts of marvelous things for fun.” Patrick agrees to let them build the Park—as long as he can live there in a new house. Once Disneyland is ready to open, Patrick moves into a “wee snug house” of his own in a secret spot at the Park known only to him.

And just as the story goes, Patrick moved into a new home in Disneyland. However, over the years, the house of this fantastic character has grown more and more popular, with many Guests now quickly knocking on the Little Man’s door near the entrance of Indiana Jones Adventure.

It would appear Patrick is not fond of visitors, as he is rarely seen outside his house, but one lucky Guest was recently able to spot him out in Adventureland. In a TikTok video posted by Clare Loughran (@clary_poppins), viewers got an exclusive look at the elusive leprechaun just outside his door.

You can see the video down below!

Many viewers were so excited to see the Little Man of Disneyland outside his house for once, even people who had no idea who this secret Disney character was said they instantly loved him.

However, some viewers were skeptical and mentioned this was probably a joke from Clare or some other Guest who placed a leprechaun outside Patrick’s home. This is most likely the scenario because even though Clare states she wasn’t the one who set the leprechaun, there is no official information on him appearing around Disneyland.

Elaborated prank or not, it is exciting to see this iconic Disneyland fable is still so famous and see more Guests become aware of Patrick Begorra’s story. And if you visit Disneyland and keep your eyes open wide, maybe you’ll see the wee man in green smoking a small clay pipe.

Have you seen the Little Man of Disneyland’s house on one of your trips? Tell us about it in the comments below!