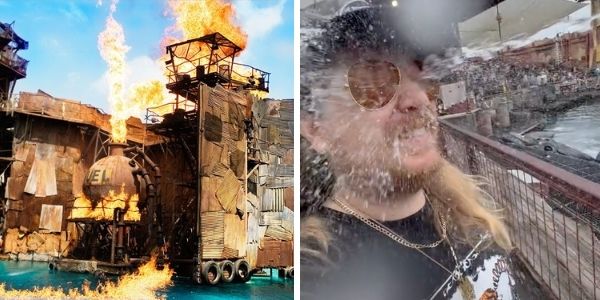 One brave Universal Studios Guest recently got quite the 4D experience at one of the live-action shows at the Park.

At Universal Studios, Guests have so many options to choose from when it comes to entertaining experiences. From The Wizarding World of Harry Potter to Velocicoaster, there are so many fun rides and attractions waiting for you. Guests looking to have a little fun with water should head over to Universal Studios Hollywood where they can watch an epic stunt show.

WaterWorld is “Universal Studios’ #1 rated show”, featuring jumping jet-skiers, perilous plunges, firefights, massive explosions, and an in-your-face plane crash you need to see to believe. Be warned, you may get wet, though as shown in a TikTok below, that was one Guest’s mission.

See the video below from @methsyndicate:

As you can see, this Universal Guest needed to cool off big time and in the process, it seems like it made the Universal team member’s day!

A Tidal Wave of Explosive Action

With new sets, a new cast, and all new action, WaterWorld is one show at Universal Studios Hollywood you just can’t miss!

There are approximately 168,500 pyrotechnic effects fired per year at WaterWorld, including giant fireballs rising 50 feet in the air.

While Universal Studios Hollywood is home to many other incredible attractions, as well, including DreamWorks Theatre Starring Kung Fu Panda, Harry Potter, and the Forbidden Journey, The Simpsons Ride, The Secret Life of Pets: Off The Leash, or The World-Famous Studio Tour, few attractions are as exciting as the upcoming Super Nintendo World.

In addition to Super Nintendo World making major progress at Universal Studios Hollywood, the world is also coming to Universal Orlando Resort at the Resort’s newest theme park. The Epic Universe is set to open in 2025 and will feature a Super Nintendo World. There are also many other rumors about what will be built in the Universal Orlando Resort Park, including Classic Universal Monsters, an addition to the Wizarding World of Harry Potter, and DreamWorks Animation attractions.

Have you ever experienced something like this at Universal?