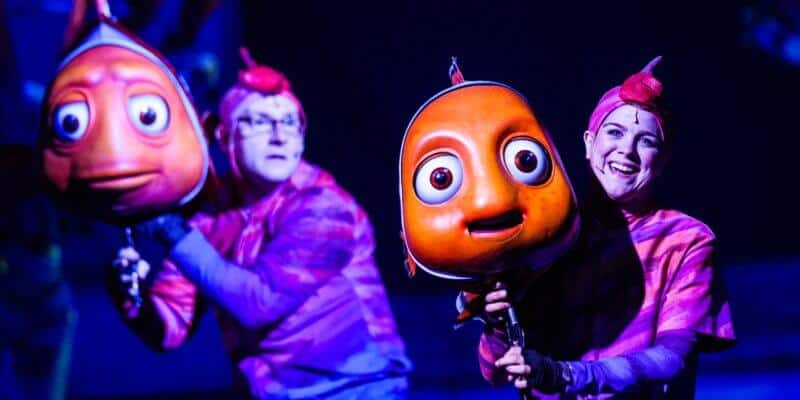 The Walt Disney Company has finally revealed the first look, along with detailed information regarding the new show set to take over the beloved Finding Nemo: The Musical at Disney’s Animal Kingdom Theme Park’s Theater in the Wild.

Nestled away at the Theater in the Wild in Disney’s Animal Kingdom’s DinoLand U.S.A, Finding Nemo: The Musical has entertained Guests since 2006. With music by Frozen‘s (2013) Kristen Anderson-Lopez and Robert Lopez, the performance told the story of Disney Pixar’s Finding Nemo (2003) using puppets, songs, and special effects and was shown multiple times a day at the Disney Park.

Finding Nemo: The Musical took its final bow in March 2020 after the Disney Parks in Orlando, Central Florida, closed down due to the global effects of the pandemic. It was only recently that Disney Parks announced it would be refreshing the beloved undersea spectacular but details at the time were not forthcoming. Now, information regarding the revived experience at the Walt Disney World Resort has been officially revealed.

Disney Parks Blog states the following on the new experience taking over the previous Finding Nemo: The Musical:

Stepping inside the Theater in the Wild, we’ll catch up with the group of fish from Dr. P. Sherman’s office in “Finding Nemo,” who have made their way across the ocean to the Marine Life Institute. The fish tell Nemo’s story in this fully updated, 25-minute show, incorporating live performers and puppets, along with many of the beloved songs and production numbers from the original “Finding Nemo: The Musical” – which is great news if you’re like me and have had “In the Big Blue World” stuck in your head since 2007.

Set in the timeline of Finding Dory (2016), Finding Nemo: The Big Blue… and Beyond will see significant changes to the previous incarnation of the musical experience, including different songs and many more technological enhancements. Disney says:

In addition to a new script, the show will feature new scenic set pieces and a new LED video wall designed to visually extend the world created by the physical sets on stage. We aren’t talking small set pieces either. Be on the lookout for a 32-foot-long sunken submarine and a fish tank volcano standing nearly 15 feet tall!

You can watch the official sneak peek at the new Finding Nemo: The Big Blue… and Beyond, which will debut during Walt Disney World Resort’s 50th anniversary celebrations, below! The new addition at Disney’s Animal Kingdom will join the Disney Enchantment fireworks at Magic Kingdom Park’s Cinderella Castle, Harmonious at EPCOT’s World Showcase Lagoon, and, hopefully, Fantasmic! when it returns to Disney’s Hollywood Studios in the near future.

No word yet on whether Finding Nemo: The Big Blue… and Beyond! will be included in the Disney Genie+ service.

What do you think of the new reimagined Finding Nemo: The Musical? Let us know in the comments down below!