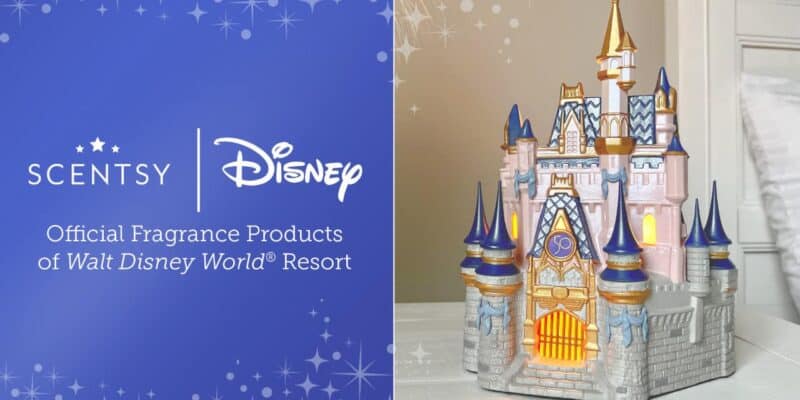 Disney and Scentsy have been teaming up for quite some time now to bring several adorable Scentsy collections , including Mickey and Minnie, Stitch , Winnie the Pooh, Jack Skellington , Dumbo, and more!

Since Scentsy and Walt Disney World have announced their multi-year relationship, we’ve been able to add to our collection such wax warmers and Mickey Mouse’s Christmas Tree, Scentsy Cinderella Carriage warmer, and now, they are releasing a Walt Disney World 50th Anniversary Celebration: Cinderella Castle for you to collect!

New to the Scentsy and Disney collaboration is the Walt Disney World 50th anniversary Cinderella Castle Scentsy warmer. Now accepting pre-orders for this glorious Florida theme park icon, Scenty will distribute these golden wax warmers in late October 2022… just enough time for you to forget you ordered it and give yourself a fabulous holiday gift! The presale begin TODAY and will end Monday, March 14 or when the number of preorders reaches the limited number of available warmers. You can bet that these are limited edition!

The Castle Warmer is available by itself for a total price of $125. Deposits of $25 will be taken upfront. If you’ve just got to have the new EARidescent wax melt, you’ll have to order the castle warmer and brick bundle for $151. Contact Scenty’s rep Four Bullies today for your purchase that donates to animal rescues!

But what if you wanted your home to SMELL like the Walt Disney World Resort 50th anniversary? Look no further than this upcoming pre-release of EARidescent Scentsy brick. This limited edition wax bar is only available as part of the Cinderella Castle Scentsy warmer bundle and is not available for individual purchase. From Scentsy, we learn more about what the EARdiescent wax melts smell like:

This fragrance was developed by Disney to celebrate the occasion and is being used throughout the celebration at Walt Disney World® Resort and hotels. This sparkling mix of natural elements — from cedarwood and citrus to peony and apple blossom — blends Disney themes with an added touch of wonder, evoking the excitement of a Walt Disney World® Resort vacation and capturing the magic of an enchanting place so many have loved for the past 50 years. This fragrance is only available for preorder in a bundle.

You can preorder your very own Cinderella Castle Scentsy warmer now with Four Bullies, a scentsy rep who donates all her profits to various dog rescues around the country. You get to enjoy the Disney Parks at home, and hundreds of rescue dogs get the care and rehabilitation they need.

Will you be ordering the Cinderella Castle Scentsy warmer? Leave us a comment below!