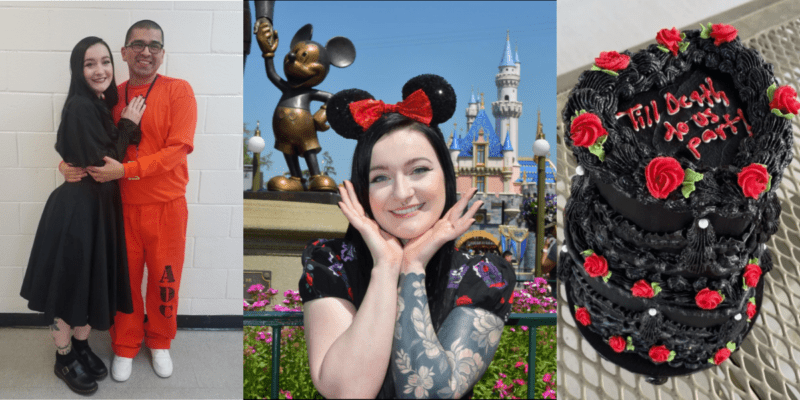 Many couples dream of a Fairy Tale wedding for their big day, looking for the perfect location and, of course, a dress that will make them feel like a Disney Princess about to have their happily ever after.

Such was the case of Rebecca Short, a British trainee dental nurse, who recently took a trip to Disneyland Resort that took a surprising turn, as it ended with her saying “I do” and getting her happily ever after.

The 26-year-old woman from Chipping Norton, Oxfordshire, had told her family she’d be making a trip to the United States, posting photos of herself at the Golden Gate Bridge in San Francisco and Disneyland Resort in Anaheim, California, wearing Mickey Mouse ears.

However, she later surprised her relatives by posting photos of herself marrying Mexican-American double murderer Manuel Ovante Jr, 35, who is on death row at Eyman jail, Florence, Arizona.

Short met Ovante after coming across his pen-pal profile on the internet, which stated, “I’m easy to get along with and tend to be a goofball.” Ovante also wrote the following on his profile:

Very loyal to people I care about.

Nobody is perfect, so I hope not to be judged by past mistakes.

I love to read and listen to music. I have a daughter named Bonnie

Not sure what I’m looking for in a pen pal so, I guess you’ll have to surprise me.

As reported, the double killer was allowed to leave his cell to wed his British pen-pal bride on April 14 and smiled as he posed for a picture.

Rebecca celebrated the marriage with Ovante’s family and showed off a tiered wedding cake with black icing and the words “Till death do us part!”

One of Short’s friends said she was “always obsessed with watching Netflix documentaries about serial killers in America, but no one thought she’d run off and marry one,” according to an interview with The Sun.

Ovante is one of 113 death row prisoners at the Arizona jail, where inmates set for execution typically spend 17 years before they are killed by lethal injection. However, the date of his execution was not disclosed.

This is truly a love story worthy of competing with Constance Hatchaway from the Haunted Mansion, but bizarre as this story may be, this couple was able to find their happily ever after in perhaps one of the most unexpected places.

Thanks to Disney+, more people have become aware of the possibility of having their own Happily Ever After with a Fairytale Wedding. The synopsis of the series Disney’s Fairy Tale Weddings reads:

The show provides a behind-the-scenes look at the weddings and engagements of couples that take place at Disney destinations including Walt Disney World, Disneyland, Disney Cruise Line, and at Aulani in Hawaii. It is coordinated by Disney’s Fairy Tale Weddings.

We love, love.
It deserves to be celebrated unlike anything else in this world. And that’s why we’ve worked our magic bringing countless weddings to life for over 3 decades.

Our passion is to discover new, creative ways to honor love stories. And because every couple is unique, we’re devoted to finding ways to celebrate them that are just as special. When love takes your breath away, we’ll help you find a breathtaking location to share your vows. And before getting lost in the moment, you’ll discover Disney service made it possible for you to be truly present in it.

We even partner with a designer to create wedding gowns inspired by princesses and engagement rings with a touch of pixie dust. We celebrate real couples’ love stories on Disney+ and inspire truly magical ceremonies.

Wherever and however love stories have been honored, whether an engagement, wedding, honeymoon or vow renewal, for 30 years we’ve brought them to life in truly magical ways. And we love that there’s so many more yet to be written.

Would you like to have a Fairy Tale Wedding of your own? Let us know in the comments!