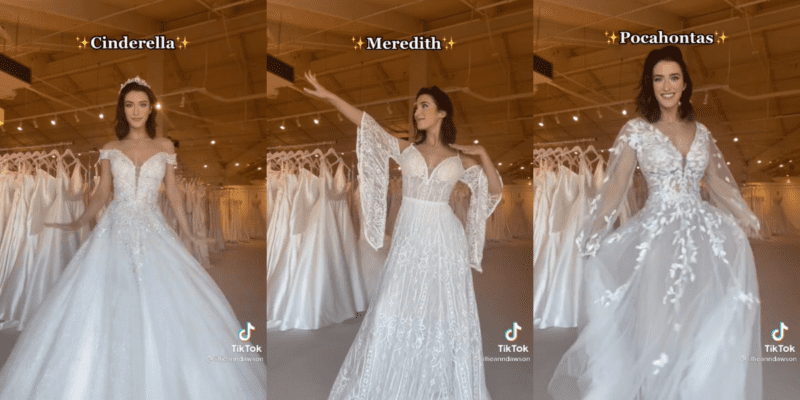 Many couples dream of a Fairy Tale wedding for their big day, looking for the perfect location and, of course, a dress that will make them feel like a Disney Princess about to have their happily ever after.

While Disney has an official agency, Disney’s Fairy Tale Weddings & Honeymoons, to plan for a true Fairy Tale Wedding, many dress shops and external agencies try hard to offer more affordable options for Disney-loving couples. However, offering Disney Princess-inspired dresses can not always be a magical experience, as was the case for Bella’s Bridal & Formal.

Related: Entire Disney World Park Shuts Down Because of One Guest

Recently, a tweet by sydney (@clarabellecows) showed some of the wedding dresses inspired by Disney Princesses that can be found in the shop, and the response is clearly not what the company would have expected.

Viewers on Twitter were outraged over the misspelling of Merida’s name, Disney and Pixar’s princess featured in Brave, while also stating they could barely see a resemblance to the Disney Princesses that had inspired the dresses. One user even mentioned the comments on the original video had been turned off when they tried to watch it.

However, after looking for the original video, posted on TikTok by lillieanndawson (@lillieanndawson) in February, we found it had a much different response. While some viewers did correct the misspelling, most were comprehensive and even made jokes about it. Even Lillie Ann commented:

“Hi guys! 1) yes I know I said Meredith instead of Merida (too much Greys Anatomy and a simple typo) 2) I will re do Ariel’s dress and not do a mermaid” and

“I wish I could personally apologize to Merida”

You can watch her original video down below!

Which dress is your favorite?? #wedding #weddingdress #disney #disneywedding

Which dress is your favorite?? #wedding #weddingdress #disney #disneywedding

In fact, the video was so successful that Lillie Ann posted a second part and even a Disney Villains inspired version in the following weeks.

Thanks to Disney+, more people have become aware of the possibility of having their own Happily Ever After with a Fairytale Wedding. The synopsis of the series Disney’s Fairy Tale Weddings reads:

The show provides a behind-the-scenes look at the weddings and engagements of couples that take place at Disney destinations including Walt Disney World, Disneyland, Disney Cruise Line, and at Aulani in Hawaii. It is coordinated by Disney’s Fairy Tale Weddings.

We love, love.
It deserves to be celebrated unlike anything else in this world. And that’s why we’ve worked our magic bringing countless weddings to life for over 3 decades.

Our passion is to discover new, creative ways to honor love stories. And because every couple is unique, we’re devoted to finding ways to celebrate them that are just as special. When love takes your breath away, we’ll help you find a breathtaking location to share your vows. And before getting lost in the moment, you’ll discover Disney service made it possible for you to be truly present in it.

We even partner with a designer to create wedding gowns inspired by princesses and engagement rings with a touch of pixie dust. We celebrate real couples’ love stories on Disney+ and inspire truly magical ceremonies.

Wherever and however love stories have been honored, whether an engagement, wedding, honeymoon or vow renewal, for 30 years we’ve brought them to life in truly magical ways. And we love that there’s so many more yet to be written.

Would you like to have a Fairy Tale Wedding of your own? Let us know in the comments!