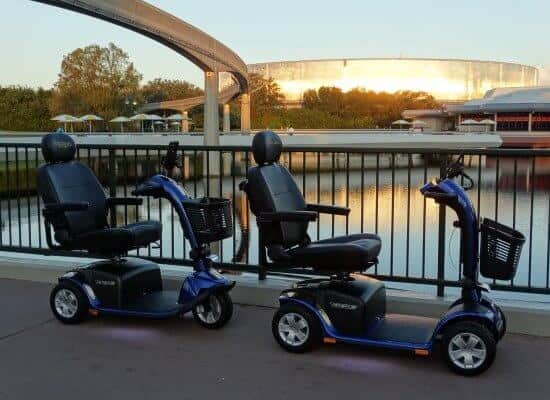 This photo of Gold Mobility Scooters is courtesy of TripAdvisor

After countless controversies continue to surround The Walt Disney Company, one more issue will be added to the list as one Guest is now suing the company for injuries she sustained while at the Disney Parks.

Jamie Pineda is now suing The Walt Disney Company for over $30,000. Pineda claims she was hit from behind by a scooter while she stood in line for an attraction last December while visiting EPCOT, according to Florida Politics, stating that her lawsuit was filed on March 31 in Orange Circuit Court.

As many Disney Park veterans know, Christmas is an incredibly busy time at the Disney Parks with crowds filling the Resort for weeks.

Visiting on December 29 means Pineda would be at the Parks right between Christmas crowds and New Year’s Eve crowds. In an interview on Tuesday, Lowell Karr, the attorney representing Pineda said the incident happened while waiting for the Beauty and the Beast Sing-Along Film in the France Pavilion at EPCOT.

Related: Disney Announces Nearly Half Of Disney World Will Be Powered By Solar Energy

“It completely ruined her trip,” Karr said. “It’s a huge blow. You go to the theme park and want to have fun with the kids.” Her attorney said her injuries included dislocating her knee and suffering a tear in her ankle.“She returned home to get medical treatment,” Karr said. “She is still receiving treatment for some of these injuries.”

Specifically, the lawsuit which was filed accuses Disney of letting the popular electric scooters get too close to Guests and not maintaining order for other Guests as well as failing to help Pineda after she was injured, among various other allegations. “She suffered significant injuries while at the park, and she believes Disney is responsible for that,” Karr said.

This is not the first incident regarding an electric scooter we have seen at the Disney Parks as it seems sometimes it is hard for Disney to maintain and regulate everyone who happens to use one in the Parks. As of now, Disney has not made a statement regarding the lawsuit.

Have you ever experienced an issue with the electric scooters at Disney World?