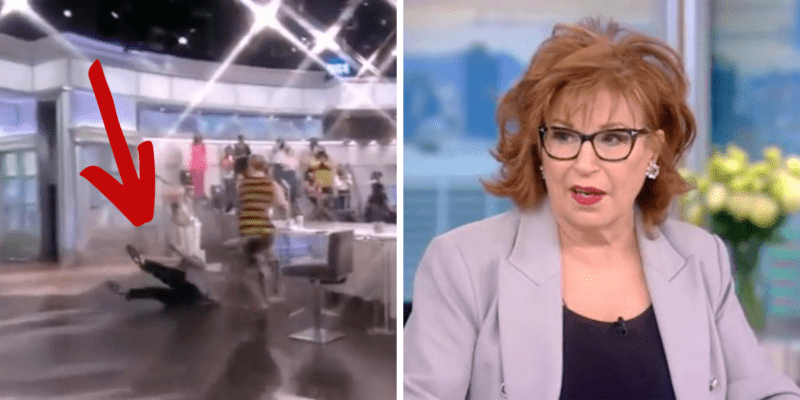 Joy Behar, 79, took a nasty spill on set of ABC’s The View on Thursday’s episode.

The comedian and host of The View was walking out onstage at the start of the live show when she suddenly slipped and fell flat on her face just before reaching her seat.

The fall was caught on video and shared to social media by several accounts. In fact, Twitter account The Chat shared the video to social media, saying:

OMG! Joy missed a step and fell right before sitting down #TheView

OMG! Joy missed a step and fell right before sitting down #TheView pic.twitter.com/kw0cUBq88Z

As seen in the video above, the co-hosts of The View, Sara Haines, Whoopi Goldberg, and Sunny Hostin, all rushed to Behar’s side to make sure she was okay as she fell flat on her face.

“25 years, that has never happened,” Behar said laughing as she stood up. “Who do I sue?!”

The hosts went on with the show, discussing their first Hot Topics segment. Shortly afterwards, the co-hosts of The View continued to make light of Behar’s fall.

“I want to clear something up, because you know how things get out and do things. I just want to clear up, Sara [Haines] did not trip Joy,” Whoopi Goldberg said jokingly. “She did not do it, and stop sending us texts!”

To which Behar added, “I keep getting texts from people saying, ‘That’s a viral moment, you’ll be on Page Six.’ That’s all the people really care about!”

“The main thing — just to talk seriously — when Bob Saget fell, he died. If you hit your head, and you feel dizzy or you have blurred vision, or you feel like you want to go to sleep, go to the doctor. Because that will kill you.”

We are glad to see Behar is okay and did not suffer any serious injuries after her nasty fall on The View.

The View is an American talk show created by broadcast journalist Barbara Walters and is currently in its 25th season. The show has aired on ABC since August 11, 1997. Joe Behar joined The View as a co-host in 1984.

The show has been involved in some controversies over the yeas, the most recent involving co-host Whoopi Goldberg, who was suspended for two weeks after her comments regarding the Holocaust was “not about race” received criticism from many.

A few weeks ago, on an episode of The View, the co-hosts discussed the news surrounding a Tennessee school board’s ban of “Maus,” which is a nonfiction graphic novel about cartoonist Art Spiegelman’s father’s experience surviving the Holocaust.

“Let’s be truthful about it because [the] Holocaust isn’t about race,” Whoopi Goldberg said on the episode. “It’s not about race. It’s about man’s inhumanity to man.”

ABC suspended Goldberg for two weeks. She made her return on Monday, February 14.

Are you a fan of ABC’s The View? Let us know in the comments below.