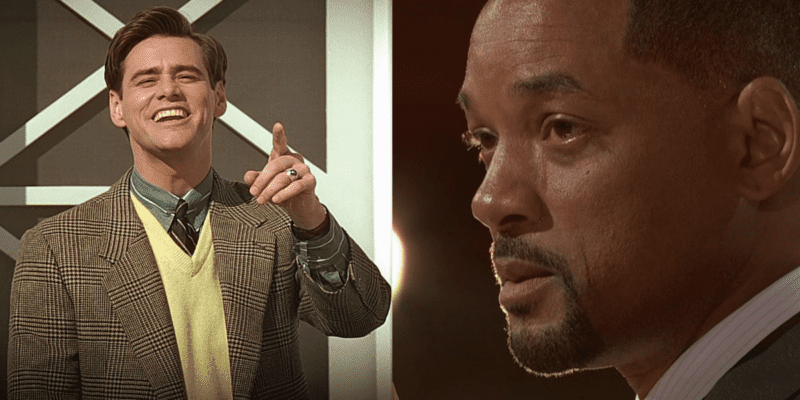 All of Hollywood is talking about Will Smith’s infamous, aggressive moment during the 2022 Oscars. When comedian Chris Rock made a low blow joke about Smith’s wife, Jada Pinkett Smith, and her hairless (caused by alopecia), the Bad Boys (1995) actor interrupted Rock’s presentation and slapped him on live television:

Will Smith interrupted the Oscars and blew rating out of the water after slapping Chris Rock, topping off the night with “Keep my wife’s name out yo f***ing mouth!” two times before ABC cut the program.

Upon wrapping up his emotional speech, Smith claimed that he wanted “to be a vessel for love,” the Oscar audience gave the actor a standing ovation.

This, as well as many other moments from the night, infuriated some of Hollywood’s biggest stars, including Star Wars legend Frank Oz. Legendary actor Jim Carrey was “sickened” by Hollywood’s response to Will Smith’s violent actions:

“I was sickened. I was sickened by the standing ovation. Hollywood is just spineless en masse and it really felt like this is a really clear indication that we aren’t the cool club anymore.”

Will Smith apologized to the Academy and the Williams family during his acceptance speech, stating that “love will make you do crazy things.” Smith jokingly shared that he must “look like the crazy father, just like they said about Richard Williams.” Smith later apologized to Chris Rock publicly on Monday.

While promoting his upcoming Sonic 2 (2022), Carrey caught up with HuffPost and shared his thoughts on Will Smith’s “Selfish” moment:

“I’d have announced this morning that I was suing Will for $200 million. That video is gonna be there forever. It’s gonna be ubiquitous. You know, that insult is gonna last a very long time.”

“You do not have the right to … smack somebody in the face because they said words… A selfish moment that cast a pall over the whole thing.”

“That insult is gonna last a very long time. If you want to yell from the audience and show disapproval or say something on Twitter [that’s fine]. But you do not have the right to walk up on stage and smack somebody in the face because they said words.”

“[The slap] came out of nowhere because Will has something going on inside him that’s frustrated. I wish him the best. I have nothing against Will Smith. He’s done great things, but that was not a good moment. It cast a shadow over everyone’s shining moment last night…It was a selfish moment.”

Jim Carrey has denounced the Hollywood elite and their double standards in recent years. Many viewers have condemned the Academy for awarding Will Smith after violently hitting Chris Rock, stating they “condone violence”:

The Academy banned Kevin Hart for historic Tweets…..
Will Smith assaulted Chris Rock and verbally abused him in front of millions.
They gave him a standing ovation and an Oscar.
No more virtue signaling lectures on anything from these people. On anything. Ever.

The Academy banned Kevin Hart for historic Tweets…..
Will Smith assaulted Chris Rock and verbally abused him in front of millions.
They gave him a standing ovation and an Oscar.
No more virtue signaling lectures on anything from these people. On anything. Ever.

A civil war has broken out over Will Smith’s controversies, with half the internet praising him while the other cancel the actor. Nonetheless, many share Jim Carrey’s opinions.

The Gemini Man (2019), Collateral Beauty (2016), Bad Boys (1995), Muhammad Ali (1995), and Wild Wild West (1999) actor was comforted by Denzel Washington and Tyler Perry at the Dolby Theater in Los Angeles during a commercial break following the incident with Chris Rock, making way for the actor to compose himself before accepting his award and giving the spotlight to Jessica Chastain.

Do you agree or disagree with Jim Carrey’s comments? Let us know in the comments below!