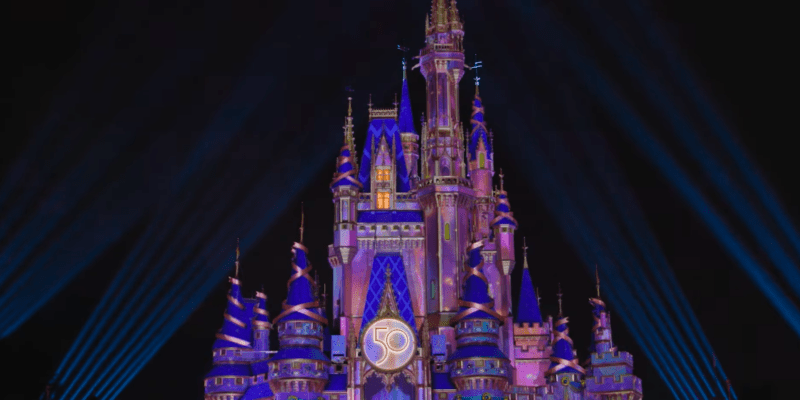 When Disney Enchantment was revealed as the new firework show, Disney fans were not yet told Happily Ever After was leaving for good. Disney fans were shocked once Disney announced the show was ending after a much shorter run than Wishes.

Many were sad to see a show that brought so many emotions to Guests was leaving. Still, knowing that Disney Enchantment would be even bigger, projecting onto Main Street, U.S.A., I personally tried to stay optimistic about the incoming show, as I am one of many who loved Happily Ever After from the moment I saw it.

Replacing the classic “Happily Ever After” song is “You Are the Magic” which has already become quite catchy to my ear. It has not yet won over “Happily Ever After” for me yet, but over time I can easily see this song becoming a new favorite. The show opens with Angela Bassett narrating, and has stunning projections. Disney really brings many characters to life on Cinderella Castle, which to me, matched Happily Ever After.

The show also utilizes the 50th castle look well, with the Beacons of Magic coloring appearing throughout the show in various ways. Happily Ever After was a show that was meant to give Guests a sense of hope, in my opinion, where you were looking for that happily ever after. Disney Enchantment is more of an empowering show as it tells Guests that they have magic within them. You do still get a beginning, middle, villains section, and conclusion. The music pulls in new songs such as “Into the Unknown” from Frozen 2, and newer characters from films like Coco, which is great to see as we have not seen these songs used in a Magic Kingdom evening show yet.

Harmonious took over EPCOT Forever at EPCOT and utilizes the heavily scrutinized barges. Although the show is heavily driven by IP, I am a big fan of the way Disney was able to reimagine the songs, and create a stunning visual on the World Showcase Lagoon. The show is not an emotional spectacle like Illuminations once was, but feels more like an energetic party.

In the end, I was a big fan of Harmonious, but Disney Enchantment has not yet lived up to Happily Ever After, after months of watching the show. The criticism that both shows have faced since their debut has been quite massive, with fans comparing them to their predecessors (much like myself) or being disappointed in the lack of 50th celebration additions added, specifically when discussing Disney Enchantment, a 50th anniversary show, and the show that has received the harshest review from Guests.

But, we can clearly see through social media, that there are some Guests who do not understand why negative comments have been left for either show. Bettedavis_eyess took to Reddit to ask why there has been so much hate around both of the new Disney nighttime shows.

Why so much hate on Enchantment and Harmonious?

In my heart I’ll always be a Wishes girl. And I never got into the previous Epcot show, not really even sure what it was called….

But I love Enchantment, and really love Harmonious.

What’s with all the hate for these shows?

Why so much hate on Enchantment and Harmonious? from DisneyWorld

Some other Disney fans joined in on the conversation, expressing their beliefs and reviews on the two shows. One Guest expected Enchantment to top Happily Ever After, but felt it did not.

Happily Ever After was very good. Like make me cry listening to it even on YouTube good. I rewatch it from time to time. Wishes was pretty good too. Those two really captured the Disney spirit. Why you go to Disney as an adult and why you loved Disney as a kid. There was soul and magic in those two shows. Enchantment really fell flat for my expectations. After HEA I was expecting something even more magical than the last but it felt like they just threw it together and didn’t spend as much time crafting the story. Don’t get me wrong, it’s good but it’s just not great.

I had no expectations for Harmonious. I thought it was good and I had never watched the closing show at Epcot before that. So idk.

Another Guest thinks that Harmonious has not been loved because of how it is no longer based on EPCOT ideals, according to some. It should be noted that multiple languages are used in the show, highlighting the World Showcase like never before.

I think people hate Harmonious is mainly due to the fact that they hate that EPCOT in general is becoming an IP park and there are a lot of EPCOT purists. Harmonious is basically an IP show.

In terms of Enchantment, I liked it but I still think it’s a downgrade from Happily Ever After. My main issue is it lacks emotion and the finale is not as spectacular as HEA. Also, the buildup of Tinkerbell’s flight was not as emotional in Enchantment compared to HEA.

I like Wishes for the soundtrack but I guess I’m so used to the projection and fireworks combo that they’re doing now.

Another Guest thinks that the hate has happened “Because people glorify the past”, while another said, “It’s different strokes for different folks. I really enjoy both Harmonious and Enchantment so I’m with you OP, I don’t understand all the hate.” In the end, the majority of Redditors commenting on the thread expressed that they loved Harmonious but the struggle between Enchantment not living up to Happily Ever After for many is still present. At the moment, neither show has an end date.

More on EPCOT and Magic Kingdom

What are your thoughts on Enchantment and Harmonious? Let us know in the comments below!