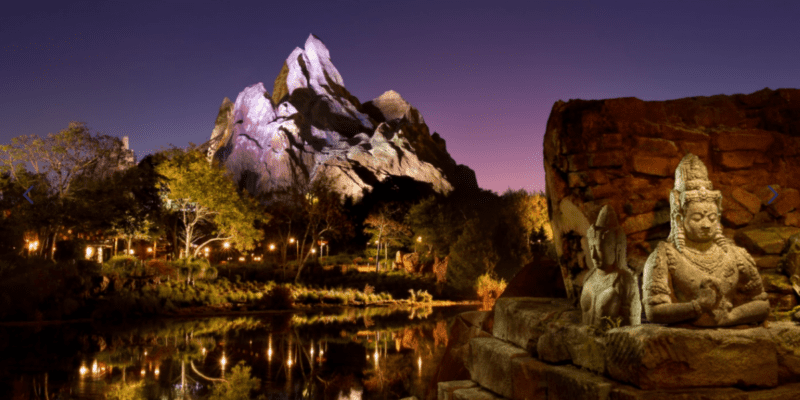 Expedition Everest – Legend of the Forbidden Mountain has been a fan favorite attraction since it opened back in 2006. The ride is currently undergoing a major refurbishment that started on January 4 and is scheduled to be finished in mid-April 2022.

While some Guests may not be aware, the ride has been troublesome since its opening, as the famous yeti that lives in the mountain had to be deactivated since he was damaging the structural integrity of the ride.

With the ride being unavailable for Guests and some other refurbishments around the Park, many have stated that Disney’s Animal Kingdom lacks attractions. Fortunately, in a recent video, we were able to see an unbelievable experience taking Everest’s place.

TikTok user Feesh (@lookatmyfeesh) shared a video outside the queue, where Guests can enjoy a fun game of hopscotch or stand in a circle and spin. Both games were most likely placed by Cast Members using masking tape, and while it is yet to be seen if they become as popular as Expedition Everest, it is fun to see Cast Members being creative during the attraction’s closure.

Viewers were quick to ask if these new attractions would offer the Lightning Lane option and how much they would cost while also stating they actually looked like fun alternatives to the ride.

While many Guests are hoping for the currently static Yeti to be fixed during this refurbishment, recent reports state that the main focus of the refurbishment will be on ride control systems and not the actual show nor the Yeti.

Though Disney’s Animal Kingdom is undergoing some major refurbishments, there is still a ton to see and do!  Pandora will bring your Avatar dreams to life with Flight of Passage and Na’vi River Journey bringing Guests into the world of the Na’vi. DINOSAUR is still filled with giant dinos at every turn, and over at Kilimanjaro Safaris, you can take a ride on an authentic safari, and if you are lucky, a giraffe might even step in your way! A Celebration of Festival of the Lion King is now running, and the show is not one you should miss. Also, Disney KiteTails is still showing, and a reimagined version of Finding Nemo – The Musical is coming this year!

Will you embark on Expedition Everest once it reopens? Let us know in the comments below!