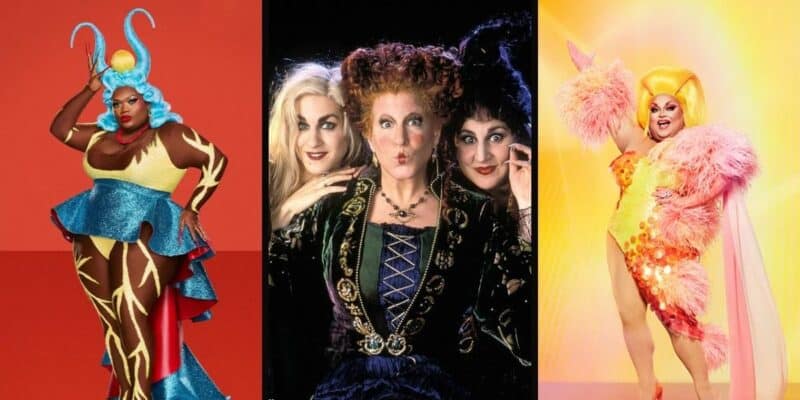 Start your engines… and may the best witch win!! The much-awaited Hocus Pocus 2 (2022) doesn’t debut on Disney+ for several more months, yet the buzz surrounding this fan-favorite sequel keeps getting hotter. The most recent news pings RuPaul fans everywhere as Kornbread, Ginger Minge and Kamora Hall join the already star-studded cast of Hocus Pocus 2.

Inside the Magic has kept you up to date on the production news for the Halloween film, as Bette Midler, Kathy Najimi, and Sarah Jessica Parker renewed their roles in the Hocus Pocus sequel. We also covered the Rhode Island farm set, as strange and eerie half houses became Salem village and the backdrop for what seemed to be the Sanderson sisters as children.

After first being announced in December of 2020, Disney confirmed that Hocus Pocus 2 was underway, with scripts from Jen D’Angelo (Workaholics) and producers Lynn Harris (King Richard), executive producer Adam Shankman (Disney’s Disenchanted), and crew from the first installment, Ralph Winter (Hocus Pocus), and David Kirschner (Hocus Pocus) serving as executive producer.  Next, Disney fans were thrilled to hear all the details coming from an official Disney+ press release about the Hocus Pocus 2 plot! According to this October press release, Whitney Peak will star as Becca, Lilia Buckingham will pose as Cassie, and Belissa Escobedo will play Izzy. These three young women live in modern-day Salem and incite the wrath of the three child-hungry witches after lighting the black flame candle.

You can watch Hocus Pocus 2 on Disney+ this coming fall, just in time for all things Halloween. Be prepared to “shantay, you stay,” because we know this cast will never “sashay away!”  Will you be watching for these amazing queens in the witchy sequel? Leave us a comment below!