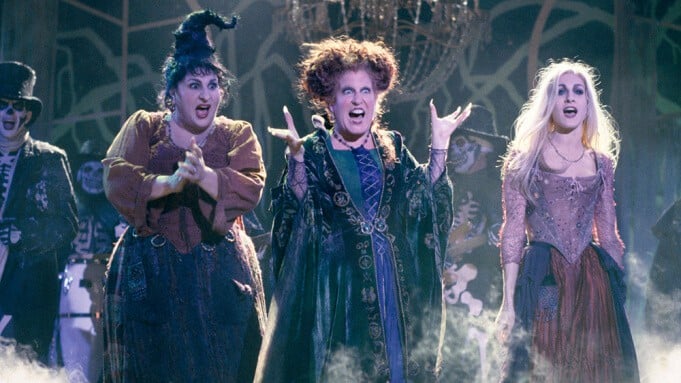 One way or another, Winifred will get us… she’ll put a spell on you, and make you hers! The clips below may spoil the new movie for you…

We know that Hocus Pocus 2‘s (2022) filming is underway in the state of Rhode Island. But we’re continuing to get clips and photos of the three Sanderson sister witches Winifred (Bette Midler), Mary (Kathy Najimy), and Sarah (Sarah Jessica Parker) costumed, on set, and now… SINGING.

Winifred’s New Spell in Hocus Pocus 2: I’m Gonna Get You

A classic song reused in the first Hocus Pocus (1993) now lives a new life of witchcraft and sorcery. “I Put a Spell on You” was originally written as a slower ballad in 1956. The song was written and composed by Jalacy “Screamin’ Jay” Hawkins, whose recording of it was selected as one of the Rock and Roll Hall of Fame’s 500 Songs that Shaped Rock and Roll.

It seems the writers and producers on Hocus Pocus 2 have taken a page from their own book and added a new musical spell into the upcoming Hocus Pocus sequel. In a secretly taped video compilation, YouTube poster Galvan Mind has listed several strung-together clips of the Sanderson Sisters on stage in Hocus Pocus 2.

It appears that in a modern-day Salem costume contest, once again Winifred, Mary, and Sarah wreak havoc and take the crowd by storm. Interrupting a costume competition, the terrifying witches run amok cast a spell over the audience at the “Salem Scare Fest”. The child-hungry witches begin casting the spell with the familiar “Ah Say Ento Pi”, and continue by singing “One Way or Another” (originally by Blondie). Suddenly, we see the Sisters fly over the crowd and start to follow the girls who brought them back to life.

Let’s take a long look at the new Hocus Pocus 2 video, whom Galvan Mind credits for each clip:

Another look at the One Way or Another video from Galvan Mind shows other clips. Listen to Bette Midler sing Winifred’s portion of the song with great witchy style, similar to the first film.

After first being announced in December of 2020, Disney confirmed that Hocus Pocus 2 was indeed underway, with scripts from Jen D’Angelo (Workaholics) and producers Lynn Harris (King Richard), executive producer Adam Shankman (Disney’s Disenchanted), and crew from the first installment, Ralph Winter (Hocus Pocus), and David Kirschner (Hocus Pocus) serving as executive producer. It’s nice to know there are original creators helping out director Anne Fletcher with this sequel!
Disney fans were thrilled to hear all the details coming from an official Disney+ press release about the Hocus Pocus 2 plot! According to this October press release from Disney+, Whitney Peak will star as Becca, Lilia Buckingham will pose as Cassie, and Belissa Escobedo will play Izzy. These three young women live in modern-day Salem and incite the wrath of the three child-hungry witches after lighting the black flame candle.
Hocus Pocus 2 will release exclusively on Disney+ in the Fall of 2022!