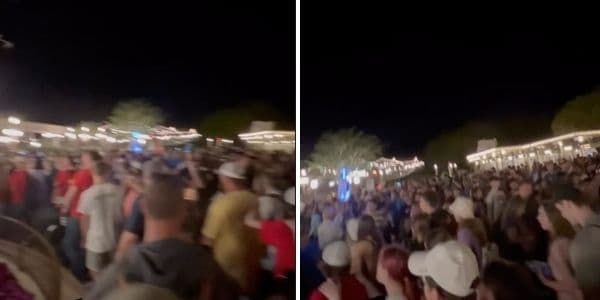 Guests recently uploaded an insane video of the chaos ensuing after Disney transportation shut down.

There is no doubt that the Disney Parks are crowded right now. With Spring Break in our midst and all four Parks being fully reserved, it seems like the Disney Parks could cave in at any moment from the sheer number of Guests inside. However, Disney is quite good about dealing with these crowds in the Parks, that is when transportation isn’t shut off.

One Guest shared the absolute chaos and madness at the Magic Kingdom last night as Guests were trying to exit the Park. In the post, the Guest claims that the monorail was shut off for some unknown reason, leaving the ferry as the only other mode of transportation out of the Park.

Unsurprisingly, the massive crowds attempting to exit the Park flooded the entrance area, causing an intense and stressful scene. See it all in a video shared on Reddit from u/kelevmilky below:

The monorail was down tonight at Magic Kingdom right after the fireworks. The ferry was the only option…

The monorail was down tonight at Magic Kingdom right after the fireworks. The ferry was the only option… from WaltDisneyWorld

As you can see, Magic Kingdom devolved into a crowded mess with thousands of Guests all attempting to exit the Park. One user in the comments said that this was a “nightmare”. Thankfully, the original poster of the video claimed that they arrived at the parking lot in about 20 minutes.

Have you ever experienced something like this? Let us know in the comments below.