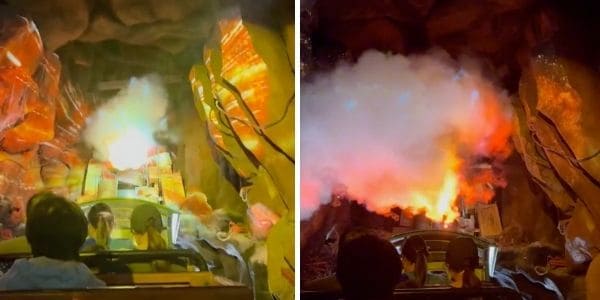 When visiting the Disneyland Resort, there are so many thrilling and iconic rides and attractions that Guests can experience. From the Matterhorn Bobsleds to Haunted Mansion, the level of quality is unmatched when it comes to Disney theme Park rides.

One of the most legendary and “wildest” rides in all of Disney Park history has to be Big Thunder Mountain Railroad, Found in the Frontierland section of the Park, this attraction offers Guests a thrilling experience as they traverse through bat-infested caverns, steep hills, and big drops. This ride is only as fun as it is when it is working and unfortunately, sometimes Guests can get stuck while onboard.

As shown on a TikTok recently, this exact situation happened just as they were topping the final lift hill at the end of the ride. As they approached the top, smoke and fire filled the cavern up as Guests stop dead in their tracks (literally) and wait for the ride to continue.

See the video below from @trythegraystuff_

As you can see, the Guests get stuck “right at the best part” of the ride, leaving Guests dangling at the top of the final hill. We aren’t sure how long Guests were stuck or if they were forced to evacuate but we can only hope it started back up soon! Ride malfunctions and breakdowns like these are fairly common and usually nothing to worry about. While nothing major appeared to have happened, the Guest still was disappointed that they got stuck at the “best part” of the ride.

During this finale, smoke and flames shoot out toward Guests but usually, it goes right over their heads as they make their way down the hill. in this instance, the effects just shoot in their face as the Guests remain stuck.

Have you ever been stuck like this? Let us know in the comments below.