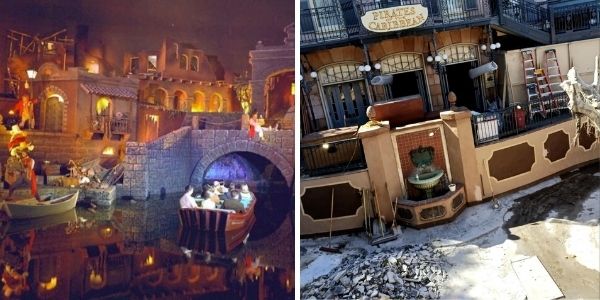 As work continues on one of Disney’s most beloved attractions, one Guest noticed some differences outside of the ride building.

To many Disney Guests’ dismay, Pirates of the Caribbean recently closed and will be undergoing an extended refurbishment, meaning Disneyland is missing one of the most iconic rides in theme Park history. This was a double whammy considering the downtime for the ride fell during most states’ Spring Break, meaning crowds wouldn’t be able to filter into the classic Disney attraction, causing even more crowded lines in other places.

We reported that Pirates of the Caribbean would be closed for an extended refurbishment and now it seems that work has extended outside of the actual ride building. Originally there were trees in front of the queue for the attraction but after rumors of the vegetation being diseased, the trees are now gone as shown in a tweet from Guy Selga (@guyselga):

Those big trees in front of Pirates of the Caribbean are gone now. Looks so different! #Disneyland

Those big trees in front of Pirates of the Caribbean are gone now. Looks so different! #Disneyland pic.twitter.com/L7scAnjCOr

Fans discussed the change on social media, talking about the trees being “sick” and also worrying that the queue might be too hot to stand in without the trees. One fan shared an image of more work being done outside, with huge slabs of concrete completely torn up:

As we have been covering, crowds coming into the parks to spend Spring Break have absolutely left the Disney Parks packed and overwhelmed, and with several Disneyland rides closed, the Resort is feeling the strain even more than it normally would. However, the holidays are about over at the Disney Parks, and hopefully, if ever so slightly, they will be less crowded.

Pirates of the Caribbean is slated to reopen this summer.

Are you missing Pirates of the Caribbean right now? Let us know in the comments below.