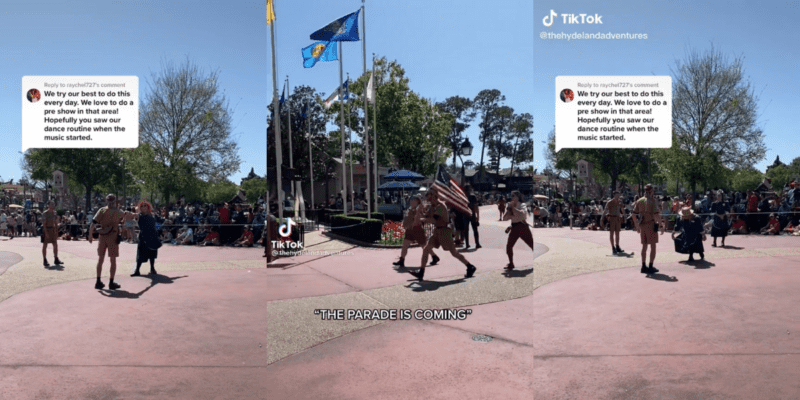 Cast Members are a vital part of The Walt Disney Company to make everything in the Parks run smoothly, from food and merchandise to security, upkeeping of the Parks, and even character interactions.

They often go the extra mile to make every visit a memorable experience for Guests, and by doing so, they can sometimes steal the spotlight while having the time of their lives, as a recent video shows.

Viewers quickly filled the comments saying how much they loved this detail and the Cast Members’ energy.

As was to be expected, the video quickly found its way into several Cast Members’ accounts, including Katy (@enchantedtaleswithkaty), who commented, “Oh my gosh that’s me!! I’m glad you enjoyed it!”

We try our best to do this every day. We love to do a pre show in that area! Hopefully you saw our dance routine when the music started.

Fortunately, viewers curious about the dance routine Raychel mentioned didn’t have to wait long, as thehydelandadventures (@thehydelandadventures) posted a video reply the next day showing a snippet of the Cast Member powered pre-show as the music of the parade started.

As things continue getting back to normal at Disney Parks, it is heartwarming to see Cast Members continue to spread Disney magic in all sorts of creative ways.