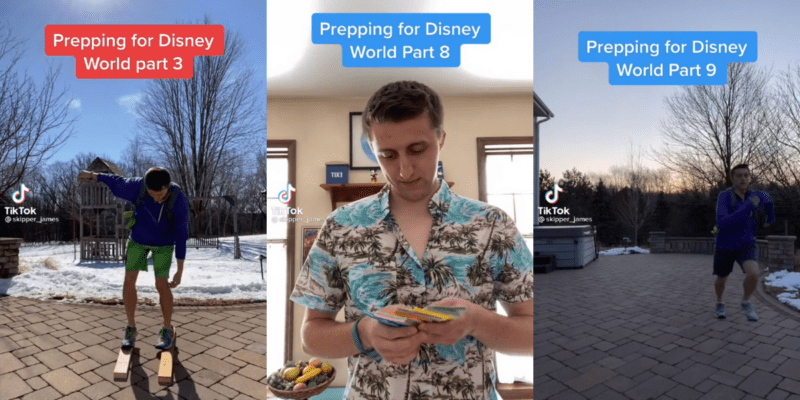 Everyone has their own way to prepare for their next Disney trip, whether it be choosing the most fashionable or comfortable outfits, planning their next DisneyBound, shopping for the latest merchandise, making dining reservations, or looking out for the latest snacks. This is, of course, while also planning on accommodation, plane and Park tickets, and most recently, Park reservations.

Related: Disney Park Reservations Selling Out for the Rest of the Month

Many social media influencers and content creators share how they prepare for each trip. While many of them do it in a glamorous way, one content creator recently started sharing his rather bizarre “Prepping for Disney” routines, catching the attention of many Disney Park-goers.

Skipper James (@skipper_james) has spent the last couple of weeks sharing his bizarre prepping routines on TikTok, and Disney fans are loving them!

His prepping videos include exercises avoiding strollers and power walking instead of running, training his ankles to face the famous  Main Street, U.S.A.,  Streetcar tracks, and getting used to the feeling of spending all of your money.

You can check out some of his “prep” videos below:

♬ I’ll Make a Man Out of You – Samuel Kim

Many fans have seen themselves in James’ videos, setting three different alarms before 6:00 am or standing in line for hours carrying heavy backpacks. Others have said they feel like they should be paying for these videos, as they are a complete Disney Parks training guide, preparing you for everything from getting hit by strollers to getting your back rearranged on Space Mountain.

Fans are eagerly waiting for the next video of this series to come, and so are we! In the meantime, we’ll power walk over to TikTok to start prepping for our next trip to the Magic Kingdom.

How do you prepare for your trips to the Disney Parks? Let us know in the comments below!