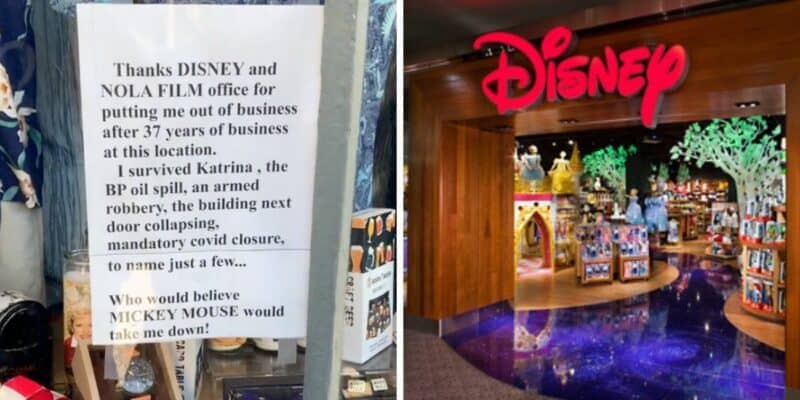 A shop owner announced their business, located in New Orleans, would be closing after 37 years, and is blaming Disney.

The store owner took to TikTok (@michaelmanzella37) to share a now-viral video, which shows a storefront with a sign stating that the shop would be closing after 37 years of business due to filming in the French Quarter of New Orleans.

Thanks Disney and NOLA Film Office for putting me out of business after 37 years at this location. […] I survived Katrina, the BP [Deepwater Horizon] oil spill, the building next door collapsing, mandatory COVID closure, to name just a few… Who would believe Mickey Mouse would take me down?

According to Nola, Disney is scheduled to film in New Orleans for the live-action The Haunted Mansion movie. In 2003, Disney released a live-action movie based on the attraction, starring Eddie Murphy, Marsha Thomason, Terence Stamp, Nathaniel Parker and more. But Disney recently revealed that a brand new live-action film based on the Haunted Mansion is in the works, which is what Disney is scheduled to film this year in New Orleans.

Katie Dippold is set to write a feature based on the classic Haunted Mansion attraction at Disney Parks (the original of which is located at Disneyland). Given that the director is well-versed in comedy, perhaps the new movie is intended to be a comedy (or at least a funnier film than the original), but nothing seems to be set in stone.

The 2003 live-action movie is currently streaming on Disney+. If you are not yet signed up for Disney+, you can get started here.