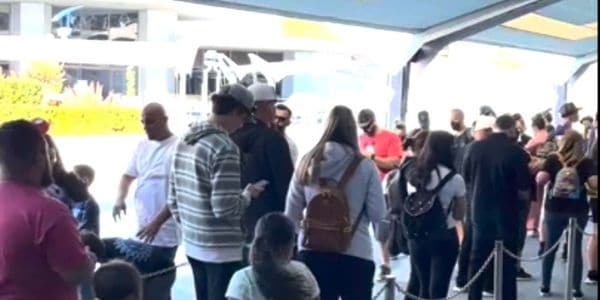 While the Disney Parks and Resorts have undergone various changes since the start of the COVID-19 pandemic in 2020, few changes have been met with as much criticism as the recently introduced Genie+.

Released officially last year, the new system was designed to helo Guests manage and plan out their day at the Parks. The app is available for both Disneyland and Walt Disney World and allows Guests to make reservations to restaurants, shows, and most important attractions. While the service is free, Guests have the option to upgrade to Genie+ as well as book individual Lightning Lane passes which basically act as FastPasses.

This change has been met with huge amounts of criticism from Guests and fans alike, claiming the service has made the experience worse and more frustrating than before. A recent post on Reddit encapsulated an issue many see with the service. See the post from u/theroadrunner below:

“Lightning” Lane at Space Mountain is practically at a standstill.

“Lightning” Lane at Space Mountain is practically at a standstill. from Disneyland

How long was standby? Did the ride break down? Just wondering if there was something else going on.

Standby was 80 min. so still getting a better wait with LL for sure. CMs wouldn’t explain the wait, except to say they are “backed up.”

User u/k9dude16 said they preferred the old version of FastPass:

I personally liked the old fast pass back in the day.

User u/chickenripp claimed that this new system has messed up the ride:

User u/dragonz-99 talked about the theory that Disney was inflating wait times on purpose:

Yeah that’s why I don’t do it. Some rides imo they seem to be inflating waits by not utilizing full capacity or by inflating the timer. Not all rides obviously, but it’s something I’ve noticed.

Imo if they see lightning lane doesn’t do well they’ll rework it or allow add-on for annual passes. Maybe I’m naive, but I go often enough and live close enough that I can still get 5 or 6 rides in, enjoy some food, and head home.

Many Guests notice this issue the most with the newer rides, especially at Disney’s Hollywood Studios. With insanely-popular rides like Star Wars: Rise of the Resistance and Slinky Dog Dash, lines at Disney World have never been longer. While the issue of seemingly inflated wait times isn’t necessarily new to Walt Disney World or any of the Disney Parks, with Disney now offering a paid service to skip the line, the concern of Disney making money off this issue continues to rise.

More on Space Mountain at Disneyland:

Have you used Disney’s new Lightning Lane system yet? What do you think about it? Let us know in the comments below.