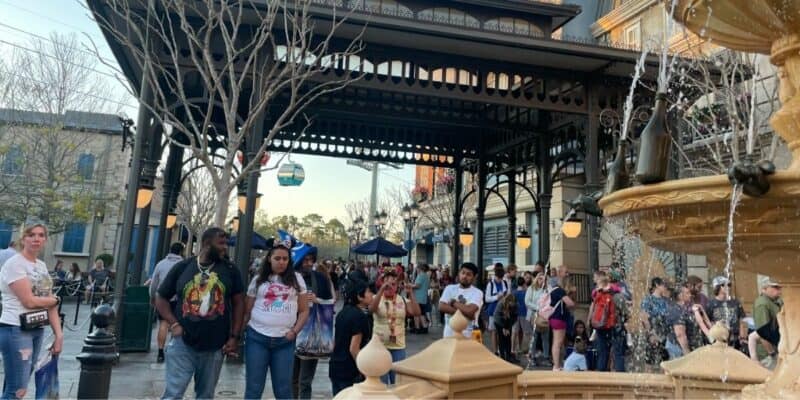 If you are planning to visit Walt Disney World Resort in the upcoming months, on the of the things you may consider purchasing is Disney Genie+, so that you can utilize Lightning Lane, and avoid long waits, but, is that extra cost worth it?

We have spent a lot of time covering the positive and negative aspects of the new feature on My Disney Experience. According to Disney CEO Bob Chapek, Guests like the new ability to pay their way to the front of the line, but oftentimes when we look at what Guests are saying on social media, there are some that do not like it as much, even after they purchased the system and had the ability to use it.

At the moment, the desire to purchase Disney Genie+ is much stronger than usual as the Parks are PACKED. All four Parks have hit capacity in terms of Disney Park Pass reservations for the weekend as we are in the midst of a long weekend, and lines are growing due to the increased demand and influx of Guests.

Unfortuantely, it seems that EPCOT has had some attraction issues this weekend as well, which has negatively impacts Lightning Lane Guests. One Inside the Magic reader sent us their experience this past weekend, after having purchased Lightning Lane individual tickets, as well as Genie+, only to have multiple rides break, causing massive backups in the Lightning Lane queue.

I went to EPCOT on Saturday February 19, and it was a busy day with no more Park reservations available. We were happy to get in as it is coming to the end of the Festival of the Arts. I bought Disney Genie+ because my kids are not good with huge lines, and the wait times were all very high. They wanted to ride Test Track and Remy’s Ratatouille Adventure the most, which is why this was all such an issue.

When we went to get in the Lightning Lane line for Ratatouille, the line was backed up so far, we were almost out of the new part of France. We waited without movement for over 35 minutes while the ride was broken, and then gave up. When we returned and the ride was working fine, the line was super long on both ends because of the breakdown. This happened at Test Track as well. When we saw the Lightning Lane line extending past the queue we asked Cast Members what the wait was.

They said that the ride recently broke so Lightning Lane was likely around 40 minutes. It is fine and I understand that rides break, but if Guests like myself cannot use Lightning Lane as it was meant to be used, to skip the line, we should not be paying for it. This was my first and last time using the system, felt like I was scammed. I spoke with Guest Relations, but nothing could be done since the rides were accepting Guests into the Lightning Lane.

It seems unfortunate that some Guests may pay for them and their party, only to be left waiting in line again. Although 40 minutes may not be as bad as 80 minutes, and Disney Genie+ cannot guarantee specific wait times, it still seems quite long to be paying for.

What do you think about the current Disney Genie+ system?