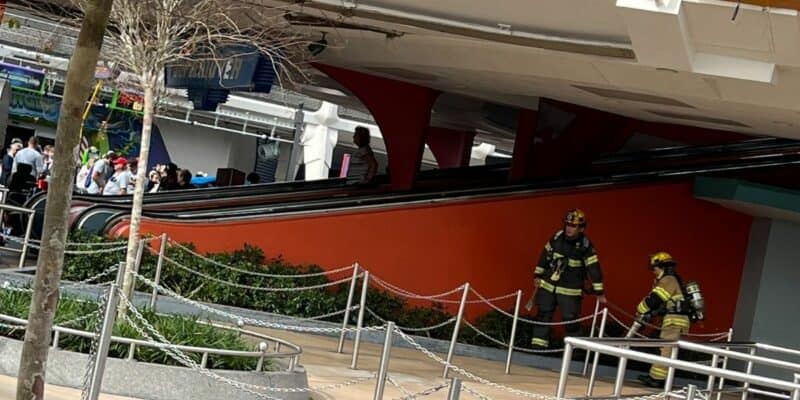 The PeopleMover has been plagued with problems after Walt Disney World reopened in 2020. After the attraction was closed until 2021, it’s faced repeated small issues,  medical emergencies, at least one evacuation and a salacious “frisky” session call out by Cast Members. Meet me at the PeopleMover, indeed. But today, February 15, 2022, Disney Guests in Walt Disney World’s Magic Kingdom noticed another disturbance.

Emergency Services Called to PeopleMover Prior to Restart

Emergency services were called to the PeopleMover on the morning of Tuesday, February 15, 2022, for an unknown reason. The event occurred in the mid-morning, around 10:30 a.m. While Guests that sent us these photos were unclear of the reason for EMS, the ride had been stopped and firefighters in full emergency gear (including an air pack) were seen making their way up to the ride.

After a safety check (and possible other work) by these EMS workers, the PeopleMover attraction again began carting Disney Guests around Tomorrowland around 11:00 a.m. EST. Service remains continuous, with about a 20-minute wait, according to My Disney Experience. Stay tuned to Inside the Magic for more information about this momentary stoppage of a favorite Florida attraction.

Embark on a 10-minute tour of Tomorrowland aboard this mass transit system of the future!

Move Above and Beyond – Board an elevated tram for a leisurely voyage through Tomorrowland. During your narrated tour, go behind the scenes of attractions like Buzz Lightyear’s Space Ranger Spin, Space Mountain and Star Traders retail shop. See architectural models of Progress City, the prototype for EPCOT.  You’ll enjoy amazing up-close views of the park from a unique vantage point.

Have you ever seen the Tomorrowland Transit Authority stopped for an emergency? Leave us a comment below!

Comments Off on Emergency Services Called to PeopleMover Prior to Restart