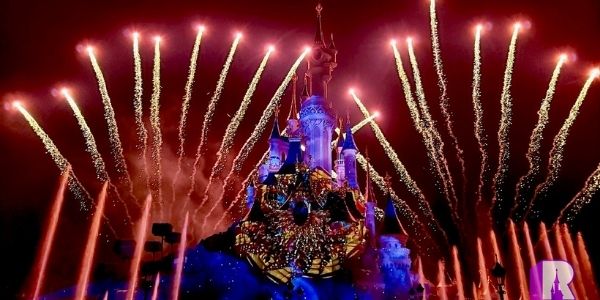 Related: Watch Disney Fireworks With NO Crowds At This Secret Viewing Area

Finally, last month, it was confirmed that Illuminations would be returning TODAY, February 16, 2022.

The celebrations will include the opening of Disney’s second Avengers Campus this summer. The first Marvel-themed land, of course, can be found at Disneyland Resort’s Disney California Adventure Park in Anaheim, California.

As for Guests who are visiting Disneyland Paris today, they can will be able to enjoy some relaxed pandemic restrictions —  United Kingdom residents are no longer barred from the Parks amid the nation’s “tidal wave” of Omicron infections, for instance — including the aforementioned return of the beloved Illuminations nighttime spectacular at Sleeping Beauty Castle.

Disneyland Paris officially describes Disney Illuminations as, “Warm your heart with characters from Frozen, relive the eternal story of The Lion King, and be transported by the epic soundtracks of Star Wars and Pirates of the Caribbean!”

The website also provides the following health and wellness statement:

Conditions to enter France vary depending on your country of origin. We invite you to refer to official sources for travel requirements.

You can find information about the vaccination pass here.

We continue to provide flexible commercial conditions that you can find here.

Are you excited that Disney Illuminations is officially back?

Comments Off on An Iconic Disney Fireworks Show Is Officially Back!