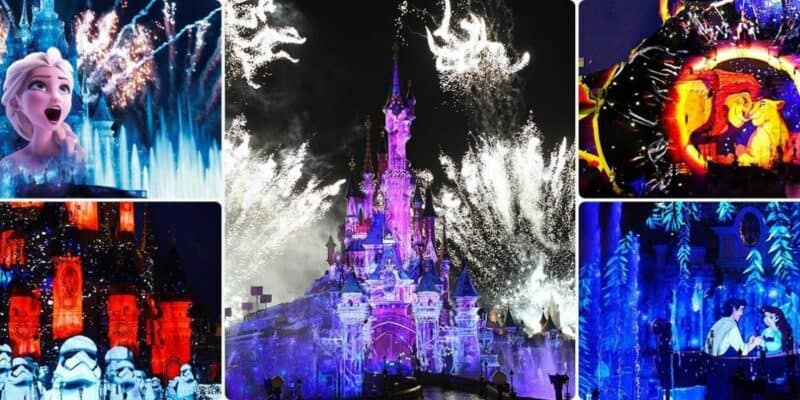 If you are a fan of Disney Illuminations, get excited because Disneyland Park at Disneyland Paris Resort is only days away from bringing this show back to life.

Disneyland Paris Resort has been undergoing a ton of change at the Resort not only faced multiple shutdowns during the pandemic but now is shaping up to be ready for the 30th anniversary celebrations, which will begin next year. With the anniversary in tow, we have seen Sleeping Beauty Castle receive a stunning refurbishment, as well as sections in Fantasyland and other attractions in the Park. On top of new lands being built and hotel refurbishments, you cannot have an anniversary without a stunning firework show!

Disney Illuminations is described as:

Head to Central Plaza for the world-famous extravaganza combining captivating music, dazzling fireworks and breathtaking projections onto Sleeping Beauty Castle that together create… pure magic! Warm your heart with characters from Frozen, relive the eternal story of The Lion King, and be transported by the epic soundtracks of Star Wars and Pirates of the Caribbean!

As we know, Illuminations is set to return on December 21, but thanks to DLP Report (@DLPReport), we can get a taste of the show a few days early! It seems that a rehearsal for the show took place yesterday evening, and it seems that Disneyland Paris is in fantastic shape to bring this show back.

Plus, with the new addition of the colored fountains, the show has never looked so fantastic!

At Disneyland Paris, lots of changes are coming to Walt Disney Studios as well as their Disneyland Park, with the 30th anniversary just months away. Walt Disney Studios is adding a massive addition that will include Star Wars, Marvel, and Frozen, as well as their very own Avengers Campus, which will be the first section to open in the Park. One of the biggest changes that we have seen is on Sleeping Beauty Castle, which was covered by a box facade for months. Recently, Disney began to uncover the castle to reveal a stunning, magical masterpiece. Disneyland Paris is also offering Premier Access, which is similar to Disney World’s Disney Genie+ system, however, all rides involved come at individual costs per Guest in order to skip the line.

Would you like to see Disney Illuminations now that it is returning to Disneyland Paris?