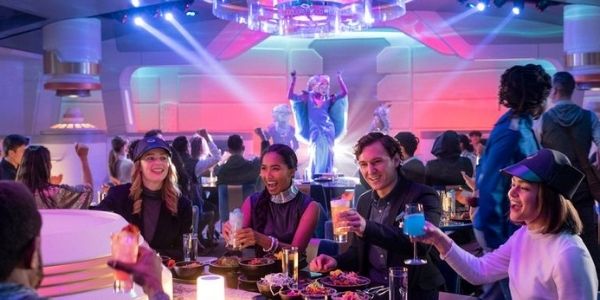 While there are so many exciting things currently happening or about to happen at the Walt Disney World Resort such as the upcoming TRON roller coaster at Magic Kingdom or Guardians of the Galaxy: Cosmic Rewind at EPCOT, none really compare to the level of hype and ambition Disney’s new Star Wars: Galactic Starcruiser.

Boasting a completely-immersive, one-of-a-kind experience, Disney is inviting all Star Wars fans to embark on an exciting journey and create their own story within this universe.

Recently, Disney revealed a closer look at what Guests can expect to find while onboard the Halcyon, a Corellian MPO-1400 Star Cruiser which is operated by Chandrila Star Line. From food, themed entertainment, and exciting encounters with iconic characters like Rey and Kylo Ren, the new Resort is shaping up to be an unbelievable experience. See the new photos in a tweet from reporter Scott Gustin (@ScottGustin) below:

Disney has released some new #Starcruiser promo images including a look at the main atrium, the launch pod, the Crown of Corellia Restaurant, and other areas around the ship.

Disney has released some new #Starcruiser promo images including a look at the main atrium, the launch pod, the Crown of Corellia Restaurant, and other areas around the ship. pic.twitter.com/LFBynbCjrT

Take a closer look at the new photos below:

The new Resort will connect with Star Wars: Galaxy’s Edge at Disney’s Hollywood Studios, allowing passengers cruising aboard the Halcyon Starcruiser to experience attractions like Millenium Falcon: Smuggler’s Run and Star Wars: Rise of the Resistance as well as explore the world of Batuu.

While the overall reception to this exciting new venture into themed experiences has been mixed, there are still plenty of Disney and Star Wars fans eager to experience the new Resort once it officially opens in March.

Will you be embarking on a voyage with Star Wars: Galactic Starcruiser when it officially opens? Let us know if you’re excited about it in the comments below!