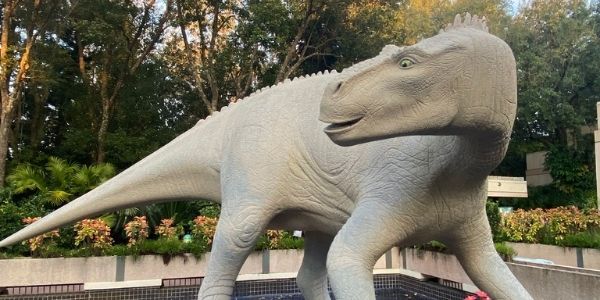 When thinking of the scariest and most chilling ride at Walt Disney World, you may think of Expedition Everest, Tower of Terror, or maybe even the Haunted Mansion. But perhaps the scariest ride can be found in DinoLand U.S.A. in Disney’s Animal Kingdom.

DINOSAUR is an intense, loud, and thrilling dark ride in the Disney World that takes Guests on a time-traveling adventure. Traveling back to the Cretaceous period, Guests encounter all sorts of friendly and not-so-friendly dinosaurs during the ride. The mission Guests go on is to retrieve the coveted Igaunadon dinosaur, but this proves difficult as Guests will have to not only avoid the terrifying Carnotaurus but also an intense asteroid assault, the same one that wiped out all of the dinosaurs in the first place.

Related: Disneyland Gears Up For Return of Tram Service

The ride is scary, to say the least, and many Guests over the years have expressed their distaste for it as well as their hopes that it will one day be rethemed, possibly becoming a copy of Disneyland’s Indiana Jones Adventure attraction which shares the exact same ride vehicle and track. extinct Dinosaursan is found in the DinoLand, U.S.A. area at Animal Kingdom. There are been talk lately on a possible retheme coming to the attraction, especially when Disney seemingly pulled the merchandise from the stores.

Related: Despite Lengthy Refurb, Pirates of the Caribbean Reopens With Multiple Malfunctions

Recently, the exterior of DINOSAUR has been undergoing refurbishment, mostly receiving paint touch-ups. The ride features a huge statue of Aladar the Iguanodon, the dinosaur that you are rescuing, and also the star of the animated Disney film Dinosaur (2000) which the ride takes inspiration. However, one Guest noticed how strange the statue looks now, taking to Twitter to share the photo. See the tweet below from @VelociJP:

Disney Twitter help,
Has he always been WHITE? pic.twitter.com/xekSnUX0bg

As you can see, the statue is now shockingly-white, appearing almost frozen. Hopefully, this is just how the primer looks and Disney is coming back to add more detail to Aladar. The ride received a fairly large refurbishment/update a few years back, adding new screens and projections as well as new lighting and some much-needed work on a few of the dinosaur animatronics. While this ride isn’t for everyone, those who love it really love it (me included!)

If you have never been on DINOSAUR, check out our complete guide on the attraction as well as Disney’s official description below:

Do you enjoy riding DINOSAUR at Animal Kingdom? Let us know in the comments below!