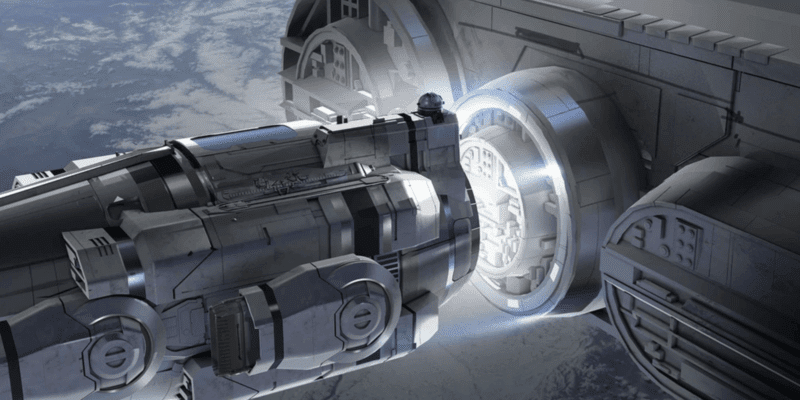 Soon the all-new hotel, Star Wars: Galactic Starcruiser, will take its maiden voyage on March 1, 2022. The Star Wars: Galactic Starcruiser has been described as a unique, immersive experience that Walt Disney Company CEO Bob Chapek has promised will leave Guests “blown away.” The Halcyon is set to make her first trip to a galaxy far, far away, and when bookings opened, the $6,000.00 experience (prices may vary) began to sell out! Everyone wanted to secure their spot on the ship, but then, things took a turn.

Now, as we come closer to the debut of the hotel many are wondering how the experience will work. The hotel is priced like a cruise and with interactive elements, planned storytelling through characters, set meals, and an itinerary of sorts, many have thought this would be similar to a cruise. Now, we have noticed something interesting.

At Disney Springs, the bus signage has been updated to include spot 18, which is for Star Wars: Galactic Starcruiser Guests only. This means that Guests will be able to leave the hotel and visit Disney Springs during their stay presumably, which is interesting as regular Disney busses will not be used for this hotel experience as it would ruin the immersive nature. A special shuttle has been built to take Guests to Batuu for one of their excursions which makes sense for the storyline as the ship will land there, but it is a little more jarring on how the ship would arrive at Disney Springs.

For now, we can see that it seems Guests will likely have a choice to leave the ship, but only time will tell to see how Disney decided to organize these departures.

What do you think of being able to leave the Starcruiser? Let us know in the comments below!