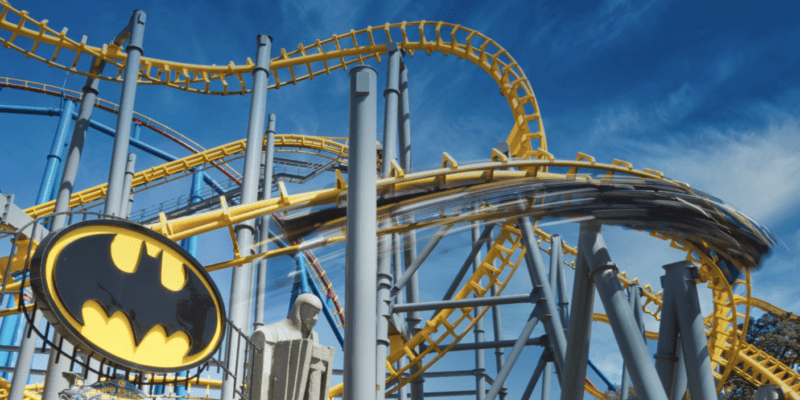 Whether you are a fan of seeing PDA at a theme park or not, one American Six Flags Park had attempted to put a stop to it all after complaints came in of an LGBTQ+ couple kissing in line.

Whether you are at Walt Disney World, Universal Orlando Resort, Knott’s Berry Farm, Disneyland, or any other theme park, Guests to not have to typically restrict themselves from kissing their partners. Of course, behaving appropriately when it comes to PDA is essential in these cases, but oftentimes, Guests understand the level of affection that is allowed to publically be displayed without causing too much attention or a scene. Well, what would you do if you were told you were not allowed to show affection at all?

AP News recently announced that “The Six Flags amusement park in Mexico City announced it is dropping a ban on “affectionate behavior” after complaints over two gay friends being taken out of a line at a ride for kissing.” It seems that this ban was put in place after what appeared to be a gay couple was seen kissing in line for a ride. It was noted that security surrounded the couple, but they were not removed from the Park. The publication noted that there were other heterosexual couples who were doing the same thing in the area, but they were not reprimanded for their actions. It did not state that the couple in question were behaving inappropriately, or showing an indecent amount of PDA. It seems that only kisses were exchanged.

After the ban was put in place, gay rights activists called for a “kissathon” at the Park. Following the outrage, Six Flags Mexico decided to back away from their policy.

“In an effort to maintain a family atmosphere, Six Flags had a policy of discouraging visitors from becoming too affectionate. However, in accordance with our visitors’ comments, we have decided that a policy referring to affectionate behavior is not necessary, and we have eliminated it.”

Because the “Affection Ban” was solely put into place after a gay couple’s PDA was complained about, the ban felt very targeted to many, which is why the “kissathon” was arranged. Even though the ban would have been for all couples, regardless of their sexual orientation, it seems that the origin of the ban left Guests feeling understandably marginalized and excluded. Luckily, Six Flags was able to realize the result of their actions and find a way to correct it so that all Guests could feel welcomes to Six Flags Mexico once again.

As we mentioned at the top of the article, while affection should be allowed at theme parks, Guests must always recognize that they are in a public location with children nearby. With that being said, the level of affection being displayed should be kept to an appropriate amount. Failure to do so could leave any Guest removed from Six Flags, or any other Park, as theme parks are based on private property and are able to make their own rules and regulations.

In California, Six Flags Magic Mountain has recently implemented a few changes. The theme park is adding a new Flash Pass, which is a pay per ride system that will cause Guests to pay an extra fee on top of the ticket price in order to skip the line for certain attractions.

This change was put in place shortly after Disneyland Resort introduced Disney Genie, which has a Disney Genie+ and Lightning Lane option for Guests to do the same. As Disney is normalizing this pay-per-ride system, we can now see that other theme parks are starting to follow suit.

What do you think of the “Affection Ban” that was put in place?