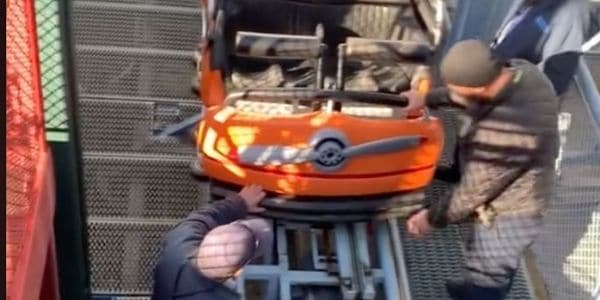 Everyone knows the most popular thing to do at Disney Parks is to ride the rides. From classic rides like Haunted Mansion and Splash Mountain in Disneyland to new and exciting attractions such as Star Wars: Rise of the Resistance in Star Wars: Galaxy’s Edge, Guests can be sure to have a fun time when riding all of these rides.

Disney rides are experienced by thousands of Guests per day, meaning they can be under some serious strain, sometimes resulting in downtime or a refurbishment. One thing you may not anticipate though is a ride being shut down because a Guest’s bag falls onto the tracks.

In a video posted to TikTok, this can be seen happening on the Disneyland ride Goofy’s Sky School. See the full video from @gadiellerin below:

As seen in the video, the Guest apparently dropped their backpack onto the actual tracks of the ride, forcing the ride to be shut down. Luckily the Guest got their bag back, but it looked like it wasn’t in the best condition after falling onto the ride. More on Goofy’s Sky School at Disneyland:

Climb aboard your flight-training vehicle and hang on tight as you take off 3 stories in the air. Zip along 1,200 feet of track on a zany roller coaster ride up, down and all around.

A Tribute to Classic Goofy Gags

Speaking of ride closures and refurbishments, several Disney attractions are closed right now. Expedition Everest, one of Disney’s most intense coasters at Animal Kingdom is closed for several months for a much-needed refurbishment. Animal Kingdom recently also saw the permanent closure of Primeval Whirl. Hong Kong Disneyland recently closed for at least two weeks, but this was due to a COVID-19 case outbreak.

Disney’s Blizzard Beach water park is also closed for the season, meaning Guests only have Typhoon Lagoon to go to for a relaxing time by the water. Check out our ultimate guide on Blizzard Beach here!

Have you ever dropped something while on a ride at Disney? Did you get it back? Let us know in the comments below!