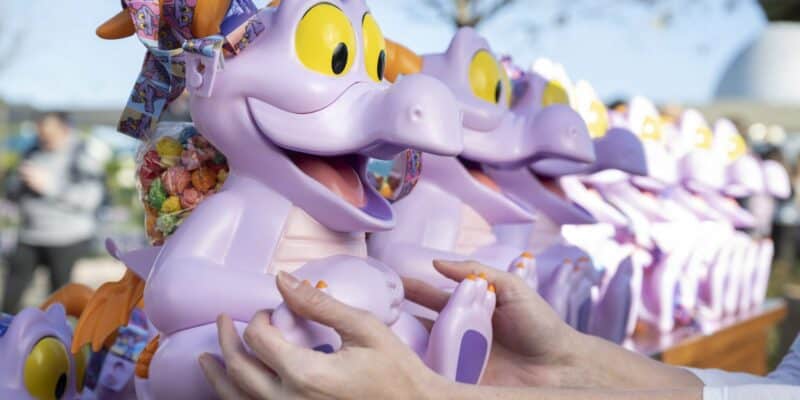 The latest craze to hit the Disney popcorn bucket collection has been found at EPCOT with the start of the 2022 EPCOT International Festival of the Arts. The festival is helmed by the character Figment, who you can see as the design for the festival’s popcorn bucket. On opening days, Disney fans waited up to seven hours to collect their bucket. Guests were allowed to purchase two per person in hopes to derail others from selling them online. That being said, the Figment buckets still appeared on eBay at costs upwards of $200.00. Some Disney fans even hilariously auctioned off hand-drawn photos of the bucket on eBay.

Each day, it seems the Figment bucket continues to sell out as you can see Guests walking around the World Showcase and out past Spaceship Earth with the purple creature around their necks. When the bucket-craze began, Universal Orlando Resort took to social media to mock all of the Disney fans waiting in the insane lines for popcorn buckets.

Now, it seems Donkey took things a step further. At Universal Studios Florida, Guests can meet Donkey, Shrek, and Fiona. Even though Shrek 4-D is now closed (with a rumored Minions attraction to potentially take over), the meet and greet has not yet disappeared. If you have ever been to this meet and greet, you know that Donkey is able to talk to you as if he were a face character, and when one Guest presented a Figment bucket, Donkey was not a fan.

Teacuptravelco (@teacuptravelco) posted a TikTok of Figment meeting Fiona and Donkey, and while Fiona is helping to find a good placement for Figment, Donkey hilariously suggests throwing the bucket in the trash, continuing the rivalry that the two theme parks continue to hold!

Lines for the bucket have become remarkably shorter, so if you are looking to purchase one, do not fret as they should be around for the entire festival as long as supplies last!

What do you think of Donkey’s suggestion? Let us know in the comments below!